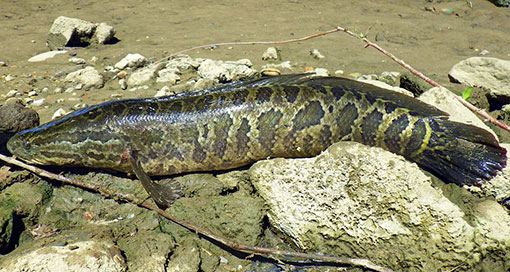 Back in the early 2000s, when I was still living up in Northern Virginia, there was an ecological incident that in all honesty, is still affecting the western hemisphere to this very day.  North America was introduced to the snakehead fish, when some idiot in Maryland or New York decided to release the non-native invasive species into a pond in Maryland.

As they have no natural predators and are omnivorous, they decimated the pond, but it’s their other ability that puts their name on the map, namely the part where they can get out of water and can survive on land for extended periods of time, effectively long enough for them to find other bodies of water, and new environments to dominate.

Despite the best efforts of professional environmentalists, the threat of snakehead fish has never been able to be truly contained, and much like the plot of a horror story, their numbers have grown and the regions in which they’ve been spotted has only grown.  Supposedly, they’ve been seen as far south as Florida, and even spotted in parts of the Mississippi River, among other places, far from their original release point in Maryland.

Well, as of yesterday, they’ve never been reported in Georgia until now.  At least four were caught in a private pond in Gwinnett county, and frankly, it’s probably already too late.  If this is anything like the original incident in Maryland, by the time they’re discovered, they’ve probably already reproduced and they’re already engrained in the ecosystem, that they’ll slowly dominate and take over until they start flopping out onto land and mosey on to other bodies of water that they can then dominate further.

Regardless of the bad news this means for the environments in which they appear, snakehead fish do fascinate me.  I remember being engrossed in all the news back in 2002 about this incredible apex predator of a fish that had no predators and ate everything in sight.  I kind of respected their power, and felt like I needed to catch and eat a snakehead fish myself, to assert my dominance over the species on the global food chain.

Seeing as how they’ve now made it into Georgia, these feelings are kind of rekindled, and I wish that I had the gear and the know-how to go find them, fish for them, catch one and then eat it, so that I can usurp its powers into myself, and maybe it’ll give me some power.