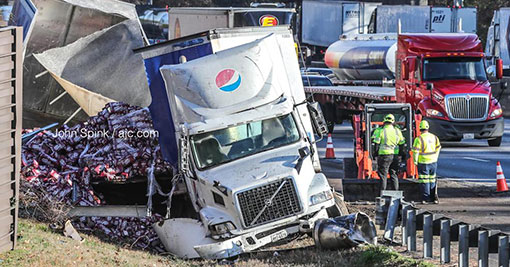 Than with a Pepsi truck crashing on 285, dumping its contents all over the place and tying up traffic for hours.  This wreck actually impacted my commute this morning too, but I’m an early riser and somehow managed to avoid the worst of it; I figured it was just the whole world returning to work at the same time causing logjams.

Frankly, this wreck couldn’t really have been in a worse place at a worse time, considering it happened right at the 285/75 interchange, during the morning rush.  From what vague details there are, it sounds like the driver fell asleep at the wheel and veered off the road; they’re banged up, but fortunately still alive, but it leads me to wonder that this particular trucking company must not be one of those that employs a co-driver, which specifically is meant to prevent incidents like this from possibly occurring.

But whatever, it’s Pepsi, and Pepsi is second-rate, especially here in the land of Coke.  In almost a prideful way, it’s entertaining to see the visuals of a wrecked-up Pepsi truck, as if Pepsi done fucked up and came to the wrong neighborhood and immediately paid for it.  As if they knew that they were in hostile territory, tried to circumvent the city by taking 285, but were too late, and blown off the road barely after getting onto the bypass.

What’s interesting to me is that of the photos I’ve seen, the vast majority of the spilled cargo appears to be Dr. Pepper.  So it’s pretty clear that this is a truck that had no intention of really unloading here, because in Georgia, Dr. Pepper is a Coke product, showing up at all fountains and Freestyles under the Coke umbrella.  It also puts me in a conflicted position, because although it’s fun to dunk on Pepsi, I have no qualms with Dr. Pepper.  So it’s kind of sad to see large portions of Dr. Pepper go down the drain, but fuck them for being in a Pepsi truck.

Either way, this marks the first post of 2020, and in spite of the sentiments of new years and new beginnings, it’s pretty much business as usual at the brog.  Glorifying dumb shit like truck crashes and the hypocrisy of Georgia and other shitheads, that is when I’m not talking about professional wrestling, baseball players getting owned, or TLC programming.