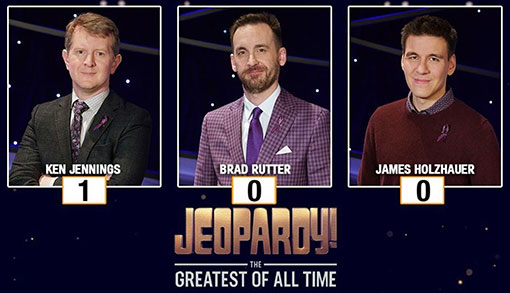 Man, that was some good Jeopardy! last night.  I felt like a black guy watching the NBA slam dunk contest at certain points of the consecutive matches, like whenever any contestant went all-in on a daily double or Final Jeopardy and got the question right.  And to think there are several more nights of this, I think it’s safe to say that there are at least two more solid nights of some solid Jeopardy! entertainment to be had.

Ken Jennings may have taken the first win of Jeopardy! GOAT tournament, and could very well  win it all; but I think it’s safe to say that when the smoke settles “Jeopardy James” Holzhauer is still the one who really changed the game.

It didn’t take a lot of time to see that from the very start, the contestants started with the high-dollar answers, a staple of the Holzhauer tactic, with the ultimate objective being finding the Daily Double(s), and then going all-in to either run away with the game, or crash and burn trying.  This was definitely not something that either Ken Jennings or Brad Rutter did in their previous runs, but by virtue of Holzhauer standing at the podium next to them, forced them to adapt.

Basically what it boils down to is that if you don’t play like Jeopardy James, there’s little way to actually beat Jeopardy James.  Contestants are forced to clear the Daily Doubles and wipe out all of the high dollar answers so that he can’t build any bank, because he’s so good at the game that he can win any game where he’s capable of remaining in striking distance.

Both Jennings and Rutter played a Holzhauer game where they sniffed out all the high dollar questions first, and unfortunately for Jeopardy James, between the two of them, they basically found every single Daily Double in the two matches of the night.  Rutter, who was there solely on his legacy from 19 years ago, found 3-4 of them, and blew it and zeroed out each time, and it’s painfully evident that in spite of his imprssive lifetime earnings through Jeopardy, he really has no place being in this tournament today.

It was a clear two-horse race between Holzhauer and Jennings; I think most assumed that would be the case from the start.  But even Jennings admit to being out of his comfort zone when he bet his entire 3,800 on a Daily Double, and you could see the immense relief in his face when he happened to get it correct.  But it no more clear the importance of playing like Jeopardy James than in the first match’s Final Jeopardy where all three contestants going all-in on their wagers, with Jennings getting the win solely based on him building a strong lead in the first two rounds.