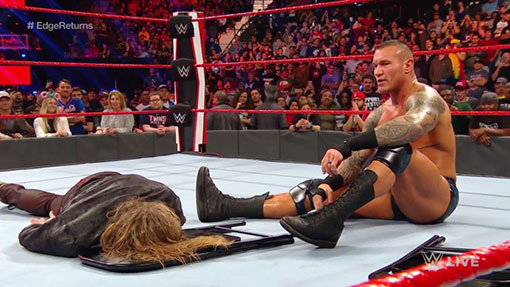 It’s not often where I feel like I’ve hit an analogy home run, but I think I hit the nail on the head with this one.  After watching Edge’s return to the ring in the Royal Rumble, and the subsequent segment on RAW the night afterward, where he was brutally attacked by Randy Orton, it dawned on me much like the sun rising: Randy Orton is basically the friend zone for WWE wrestlers.

I feel like the analogy works so perfectly, because not just in the case of Edge, but any wrestler who has the unfortunate situation of being put into a program with Randy Orton, they have to know it’s a dead-end feud with no gain to be had from doing it, much like any sad schlub of a guy who thinks they have a chance with a girl, but get put into the friend zone, and they’re the only ones who don’t realize that they’re in it.

Randy Orton has just enough name and face value to where anyone stashed with him retains some degree of relevance, but he doesn’t have enough of either to really elevate them beyond the holding pen point of relevance.  He’s basically keeping budding stars warm, but for guys that are trying to re-climb the mountain, or in the case of Edge, come back and rise through the ranks, a feud with Orton is literally being put into the friend zone, where there is no happy ending in sight, but he’ll still work like hell trying to prove something, because he doesn’t realize that he’s in the friend zone.

I mean, just look at the last few guys Orton has been paired up with: AJ Styles’ went nowhere working with Orton. Kofi Kingston not only didn’t go anywhere, all the momentum he had from Kofimania came to a slow stop, and not long after vanquishing Randy Orton, ended up jobbing to Brock Lesnar in 4 seconds to drop the WWE Championship.  It’s debatable that it wouldn’t have mattered who he was paired up against, but Jeff Hardy fell off the wagon after working with Orton.  Rusev will never get a main event push in the WWE, and working with Orton couldn’t have helped that cause, and the list goes on and on, really.

But it really sucks for Edge, considering the nine years he’s been away from the business, and as soon as he gets back, he’s thrust into a feud with Randy Orton.  I mean, this is a feud that could have just as easily happened back in 2011, and in fact have faced each other before several times in the past.  But in a company that’s chock full of young guys and guys from different companies, you’d think they’d try and pair Edge up with any one of them before Randy Orton.