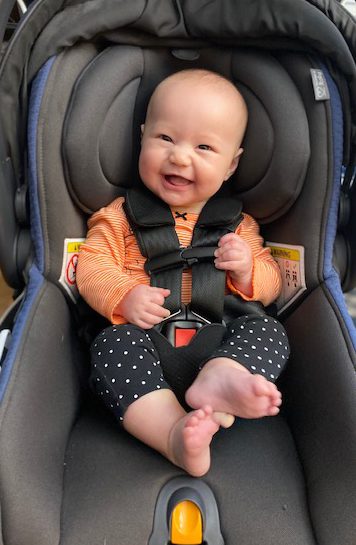 If I had a dollar for every time my kid shit herself while riding in the car, then I could easily get a Chick Fil-A Spicy Chicken Sandwich meal.  Not the classic #1 combo, the spicy variant, which costs more.  With large fries and a large drink.  And a brownie.

Like at this point, it’s pretty laughable how routine this is becoming.  I/we decide to go run an errand, and bring our child, so that she can see a little bit of the world outside of the safe confines of the house.  When we get to our destination, I remove her from the car seat, and do the courtesy sniff test, to which is naturally like getting fierce punch Tiger Uppercutted by Sagat, and then it takes ten more minutes to actually get started with whatever said errand or destination I/we are doing, because I have to change her diaper in the back seat of my car, and pray to god that nothing leaked out and soiled her active clothing, not that her travel bag doesn’t already have a spare outfit in case of emergency.

It’s just funny how she can go days without pooping sometimes, but the second she’s put in her car seat and taken out on a ride, it’s basically automatic that she’s going to blow up.  It also doesn’t matter if she actually poops at home, and creates a false sense of security that the pipes have been cleared, that when you do go out, because it’s like there’s a separate release chamber strictly meant for while in the car that will be unleashed when taken out of the house.

At least I know that if I’m ever concerned that my child is facing constipation or any strange digestive ailments that result in some backing up, I’ll know exactly what I have to do to increase my odds of helping alleviate her.

It’s naturally a little gross and off-putting at times, the whole notion of babies and poop, but historically Asian cultures are pretty laissez-faire about pooping in general, often citing good bowel movements as indicative of good health.  And since my child is half Asian, the topic of poop will not be off-limits or very taboo; if anything at all, it’s something of a personal trope that I can laugh about, at its absurd predictability.  And maybe one day when she herself is reading through my brog in the distant future, she’ll cringe and wince at the notion of dad putting this all down in writing.