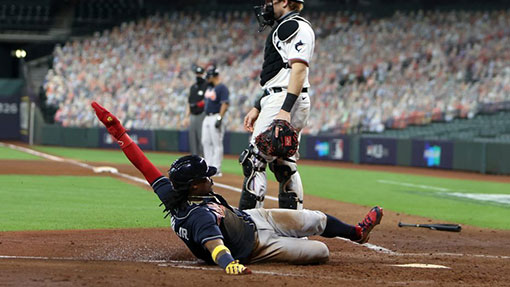 It still doesn’t mean anything to me: the Atlanta Braves sweep the Miami Marlins, advance to the NLCS for the first time since 2001

Big whoop; if it were any team other than the Marlins, then the Braves would have guaranteed lost in the NLDS, continuing their streak of getting bounced in the (real) first round of the playoffs.  The Cubs would have undoubtedly throttled the Braves, if they could only have not choked against a plucky Marlins squad that shouldn’t have been a playoff team in any ordinary season.

It doesn’t really matter though; awaiting the Braves is most likely the Los Angeles Dodgers, who were one of the odds-on favorites to win the World Series when this hackneyed season even began, and are only not already in the NLCS because of an upstart San Diego Padres team whom is being willed to success by Fernando Tatis, Jr.  But the Dodgers are a team that is playing mad, and playing like they’re owed a World Series, seeing as how they lost to both the Astros and the Red Sox in 2017 and 2018 respectively, with both teams known or likely to have been cheating in order to beat them.

Yeah, now that the Braves have gotten rid of the pretender scrubs and will be put up against a real contender, it’s only a matter of time before reality comes crashing down on things, and the Braves get swept by the Dodgers, an organization who has bounced them out of the playoffs in 2013 and 2018 and seemingly always has their number, but more importantly, Clayton Kershaw, one of the best pitchers in history and owns the Braves historically.

It’s really cute that the Braves are defying reality and have gotten some stellar starting pitching from kids like Max Fried, Ian Anderson and Kyle Wright, but it’s only a matter of time before their inexperience and the overwhelming pressure of the playoffs cave them in, and then it’s another sad pathetic October sob story is written, and Braves fans are left saying aw shucks, maybe next year, naively dismissing shit like free agency and elevator salaries, that will undoubtedly change the face of the roster by next March.

Either way, I refuse to have any hope in the Braves, in spite of their current standings.  I know what awaits them in the NLCS, which will be a real contender, and the Braves will fold like bad poker player who thinks they belong at the big table, and I won’t be disappointed by it, because it was always the expected outcome.  Baby magic has carried them this far, and at the time I’m writing this, in the American League, the also-charmed Yankees have stretched the Rays to five games to see who will advance to the ALCS, and if Baby Magic is correct, then the Yankees will advance to the ALCS where the Astros await them.

Huh, seems like the respective championship series will truly be putting Baby Magic to the test, as the Astros have historically owned the Yankees over the last few years in the playoffs similarly to how the Dodgers have owned the Braves.  But in the grand spectrum of things, there’s something fucked up and appropriate if the World Series happens to be an Astros vs. Dodgers rematch too.

Welp, better get ready for the intrigue of that matchup, because that’s probably how it’s going to be.  Yay doofy baseball season that really shouldn’t have happened in the first place!