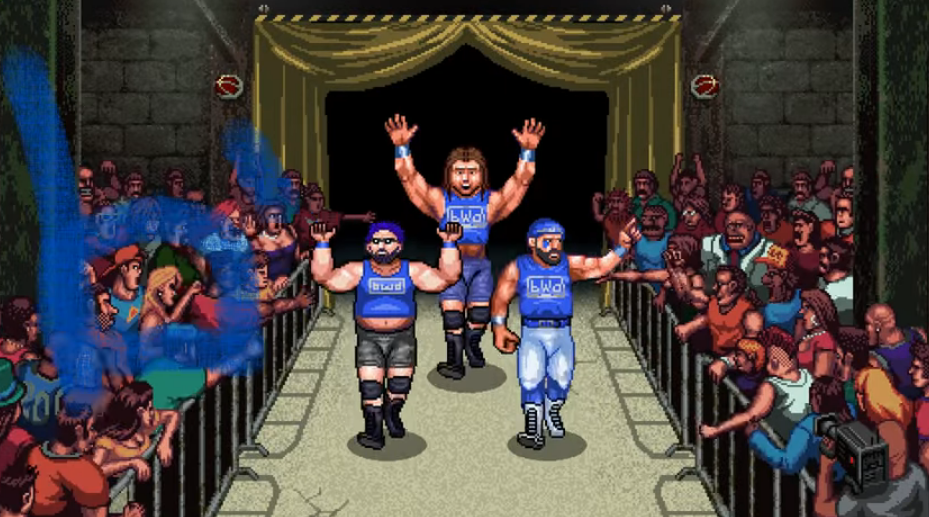 Impetus: Thirty years after WWF Wrestlefest is released in arcades, some company announces the release of RetroMania Wrestling, the “official” sequel to WrestleFest

As the title of this post says, I really want to like and be excited about this game more than I am, but there are just so many jokes and snark to unleash and get out of my system before I can resign myself to the fact that I’ll still probably impulse purchase this on Steam so that I can play with my brother and my bros.

When I was a kid, I loved Wrestlefest.  I almost always picked the Ultimate Warrior despite the fact that by then, I was already well on my way to being one of those contrarian mark types of wrestling fans and was a by far bigger fan of Mr. Perfect than I was the Warrior, but the cheapskate cheesing kid with very limited quarters didn’t like the fact that Mr. Perfect lacked many power moves, but most importantly the ability to drop a body slam, so there was no way to get cheap easy eliminations with Mr. Perfect when playing in the Royal Rumble mode.  One of my fondest memories of this game was being a such a master button masher, that no matter the fact that I had zero health in a Royal Rumble match, I would still kick out of every pinfall attempt, and I ended up outlasting two other human opponents, with me winning the rumble after back dropping the last human player out.

Hell, even as an adult, I loved Wrestlefest, and I installed Mame and got a rom of Wrestlefest, it was basically the greatest thing on the planet, that I could now play one of my favorite arcade games ever, with basically unlimited quarters, since credits could be added with the press of buttons.  I dabbled with all other characters I didn’t want to waste money with when I was a kid, and realized that the best player in the game was Sgt. Slaughter, who not only had good power moves, but an automatically initializing submission move in the cobra clutch, that anyone slapped into it had like a 20% chance of actually not tapping out of.

Needless to say, you’d think I would be over the moon that when a “sequel” was announced, I’d be more excited about it, especially since at first blush it’s basically the same game, just with different characters, settings and some modern polish.  But you hear the title, you see the roster, and realize that there’s obviously no legal affiliation with the WWE, and it kind of feels like something is missing, and the whole thing kind of comes off like a non-canonical fan-fiction of a production.