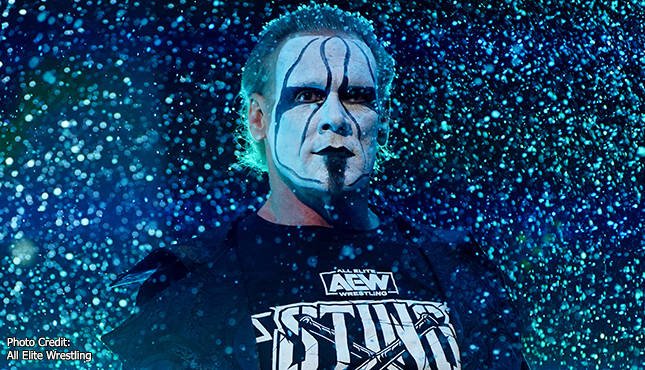 And then my thoughts swirled around the fact that the show built the entire episode’s identity around his arrival, by constantly lifting Winter is Coming from Game of Thrones, conveniently compounded by the fact that they were wrestling outdoors in 40-50 degree weather, and most wrestling attire isn’t necessarily made for warmth.

But the appearance or the gimmick was no one-off cameo; in subsequent episodes of Dynamite, every time Sting showed up, it was the same song and dance, where the lights go out, fake snow is blown into Daily’s Place, and Sting is standing there, he points a bat, Team Taz runs away from the ring, and then he and Darby Allin stare at each other until JR blathers on about going to commercial, but not of the “restaurant-quality (whatever the fuck that means) picture-in-picture” variety.

Here’s the thing though – he hasn’t done a single spot in the ring, but already I think it can be safely said that he’s had a more successful run in AEW than he ever had in WWE back in 2014.  Frankly in my opinion, Sting in the WWE was never going to work, because Sting was the true one pillar of anti-WWE, seeing as how his entire career he never jumped ship at any point, despite guys like Flair, Arn, Luger, Steamboat, Rude, Goldberg, DDP, and all sorts of legends, having done so at least once in their careers.  Sting was the true bastion of integrity that held his ground and never did go, at least not until so much time had passed, and it seemed like he went solely because of legacy purposes, but honestly, even as a jaded fan, it just seemed like his heart was never in it at all.

Sure, it’s probably because he was immediately buried by Triple H and had his first match be at Wrestlemania, where he lost to Trips, and then nearly had his career permanently ended by a botched powerbomb while working with Seth Rollins, but the fact of the matter is that it’s pretty safe to say that Sting’s run in the WWE was a pretty embarrassing flop.

But the main thing I felt was the reason why Sting failed in the WWE where he seems to succeed and get over everywhere else, is the fact that he had no pop-culture sources that he could steal from.  I mean just look at his general history:

Obviously, the WWE itself is mostly likely the reason why Sting couldn’t lift anything in the first place, as they tread more corporately carefully than everyone else, but the point of this is that as good of a worker as Sting historically is, he hasn’t really been able to get over solely on his own, since like the days of fluorescent tights, the blonde flat-top and colorful face paint.  Frankly, he probably would’ve been better off showing up to the WWE in 2014 with his old surfer Sting persona, it’s not like the WWE had any shortage of dark, brooding, silent icons.

Ultimately, I have a ton of respect for Sting, as he is the aforementioned legendary worker, has accomplished the world over in the industry, and is widely admired and revered as a genuinely good human being, which is more important than everything else mentioned.  But the reality is that his ability to get over throughout the years has leaned heavily on the popular culture being consumed in the world around him, rather than his own personality.  And when he was put into a situation where he had to work without a crutch, it seemed to expose such, especially when compared to when he returned to a setting where he could lift from pop-culture again, and is breaking merchandise sales records.