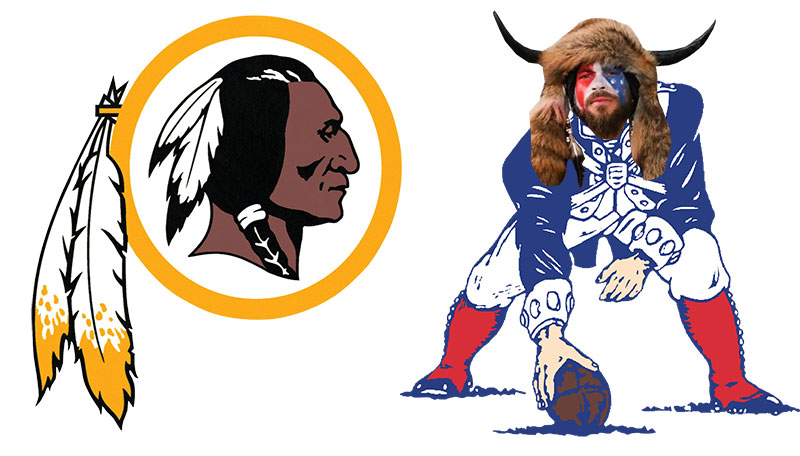 Serious question.  Based on how often the phrase “patriots” has been thrown around unironically, I can’t help but wonder if people who work for the New England Patriots football franchise wince or cringe every time they hear it.  Obviously, there’s zero (I hope) correlation between a professional football team’s identity, and a legion of white supremacist fascists, but the word is the same and when enough people hear it enough with a negative connotation, the association tends to stick, even when used in completely unrelated context.

In a very short amount of time, the phrase patriots has mutated into this very ugly and unappealing definition, and I really do wonder if this keeps up, there will be enough of an uproar and backlash to the New England Patriots to where they will actually begin considering changing their entire franchise’s name.

Obviously, when it comes to the original question, it stands to believe that the Redskins are the lock to win this “race,” seeing as how the Redskins name has been put on the shelf already, but I’m not going to give them any sort of victory until they actually pick a new name and stop parading around as the interim “Football Team” they’ve used throughout 2020.

But lest we all forget, this much progress has taken almost literally my entire lifetime, so if there was any franchise that could get overtaken by lightning in a bottle, it’s definitely the Washington Washingtons.

We live in a very fast-moving world now where there’s little patience and even less regard for repercussions and backlash, and if the association of the word patriots continues to spiral and become more solely linked to racism, white supremacy and people who would dare attempt to disrupt and overthrow governments, the sooner the New England Patriots might want to consider renaming themselves.

Think I’m going to have to rule this race, a jump ball.