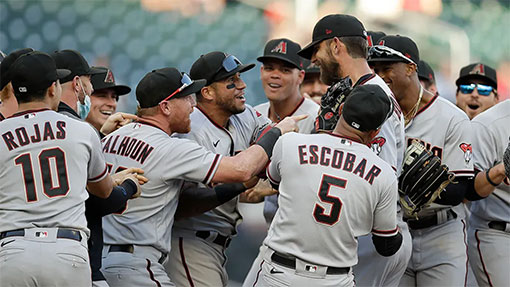 Man, talk about lowered expectations.  Many sources prior to the start of the season had the Braves pegged to win the NL East again, and potentially challenge the Dodgers and the Padres for National League supremacy.  After all, they came so close during the pandemic year that didn’t count, having a 3-1 series lead on the Dodgers before choking monumentally and failing to make a completely winnable and validating World Series against the Rays that the Dodgers won instead, that surely they could be contenders again this year, right??

Admittedly I haven’t been paying that much attention to baseball or sports in general because of new dad, but I have tangenally been keeping track of Braves scores most nights, and I’m pretty sure they’re either in last place in the NL East or at least the bottom half of the standings.

Sure, there’s all sorts of asterisks and MLB is not officially counting it as a no-hitter, but the fact of the matter is that the Braves had an absolutely humiliating and pathetic day of futility yesterday, and it seldom fails to amuse me when any team, much less the Braves has a day in which they get owned so hard.

Not only did the Braves get no-hit in the seven-inning second game, they got one-hit in the seven-inning first game, with the one hit coming in the sixth inning, which is the only thing preventing me from being all like well actually . . . the Braves DID get no-hit for nine straight innings on the same day technically . . .  But come on – 14 innings of one-hit baseball?  That’s fucking turrible and pathetic, no matter what way you look at it.

And this was the weekend where the Barves relaxed a little bit more of the attendance and let more fans into the stadium; imagine the excitement of all the fans who are getting to see live baseball in Atlanta for the first time in over a year, all giddy and thrilled to have a pleasant day at the ballpark again… and then they get to sit on their hands and slog through two straight games of the Braves getting completely demoralized and humiliated, where they get one-hit and no-hit in successive games.  Complete hilarity.

Regardless, it’s still April, and there’s still a ton of time for the Braves to get their shit together and do something.  Even if they don’t, I really won’t care that much, because I’m pretty content where I’m at with my sports fandom.  My kids come first, and only if they actually become a contender will maybe I come back to give a shit, but until then, I can sit back from afar, judge and laugh at the Braves and any other team, gets owned.