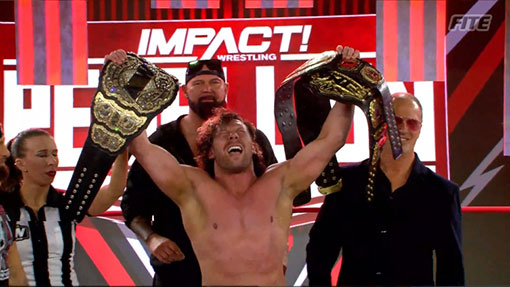 As much as I clown on AEW, I have to say that one of the things they’re doing that actually has me pretty fascinated is the way they’re booking Kenny Omega.  Which shouldn’t really be surprise that he’s got a compelling storyline, seeing as how he’s one of the VPs of AEW as well as one of the foundation blocks in which the promotion was built on.  But with his cross-promotional victory over Rich Swann of TNA/Impact, Omega adds two more blets to his expanding collection of championships, adding the TNA and Impact unified world titles to the AEW championship as well as the AAA (Mexico) championship, which basically says he is the top guy for three different promotions.

I’ve always been fascinated by belt collector storylines, because historically it’s so rarely done, primarily because more often than not, it requires a degree of cross-promotion, which is a lot like asking a Klansman to partner up with a Black Panther to save the planet.  It’s been attempted within a single promotion a handful of times, with Lance Storm coming to mind with his torrid 2000 run collecting the WCW United States, Cruiserweight and Hardcore titles in quick succession.  And as much as I liked the Miz’s run in 2010 where he was toting around three blets, the tags were unified and kind of count as one.

TNA tried to kind of run a blet collector in like 2015 when they had Kurt Angle win every single blet within the company as well as the IWGP World Championship, but so often times is the case with TNA, nobody noticed, nobody cared, and it fell flat pretty quickly when he started rapidly shedding blets, and New Japan doesn’t officially recognize the reign with the IWGP championship because of one of the many spats they had with Antonio Inoki over it.

One of the most famous blet collectors of all time was Ultimo Dragon, who once held a mind-blowing ten blets at one time, thanks to the infamous J-Crown tournament in 1996, where it was a tournament held in Japan where all participants were respective champions from varying promotions, where every blet was on the line and as participants advanced through the tournament, they would collect the championships of everyone they defeated.  In the end, the Great Sasuke would win the tournament, collecting eight blets in the process, but in a return match against Ultimo, who went in as the WCW Cruiserweight and NWA Middleweight champion, would lose, giving him ten blets in total.

In more recent years, Austin Aries became a blet collector, in a more traditional way, in the sense that throughout 2018, he actually did bounce around the indies and beat champions and eventually made his way to Impact, where he collected two blets from them, meaning as big league as TNA/Impact thinks they might be, their titles have on multiple occasions, been gathered by guys outside of their promotion.  But at the peak, Aries collected a total of six blets, and as is often the case with Aries’ career, he took himself too seriously, and kind of sabotaged his own career.

Needless to say, the blet collector doesn’t happen often, and when it does, it typically tends to sour pretty quickly and to disastrous result.  However in spite of the history of the gimmick, AEW is taking a stab at it with Kenny Omega, but in spite of my oft-criticisms of the promotion, I actually wonder if they might be able to do better with it than all preceding attempts?