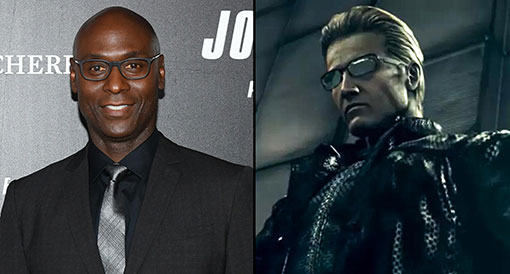 When I heard that Netflix’s upcoming rendition of Resident Evil cast a black guy to play the role of historically white Albert Wesker, my knee-jerk reaction was that of eyes rolling.  I have nothing against Lance Reddick, and think he’s an otherwise fantastic actor, but this reminds me of when Michael Clarke Duncan was cast as the Kingpin in that one shitty Daredevil film with Ben Affleck.  It doesn’t matter how physically convincing or how good of actors guys like Reddick and Duncan should portray these characters, but there are just some intellectual properties that come with some visual expectations based on the historical lineage of said IPs.

But whereas Daredevil stunk, Netflix inherently has the ability to make palatable chicken salad of out of chicken shit, so perhaps they’ll be able to take a black Wesker and make everyone watching forget about the color of his skin in their rendition of Resident Evil.  Lance Reddick has played a ton of dirty cops in his career, and he’s otherwise a very good match in age, physical stature and behavioral charisma that I’d expect someone to portray as Albert Wesker, so I’m hopeful he’ll do well being the baddest bad in the series.

Afterward, I began to think about how the black community would digest this casting, of a black man being given the role of said baddest bad, and wondering if there were those that took objection to a black man being a villain, to a society where way too large segments of it are far too easily convinced that fiction is reality, and that it’s doing the community no favors.

I posed this hypothetical to one of those friends of mine that we sounding board our random thoughts off of each other, but getting this train of thought out of the station, I came to realize that no matter what negative opinions the black community could have about the casting of a black Wesker, they’ll probably pale (no pun intended) in comparison to the raging objection of a black Wesker, from the white-guilt white community.

Frankly when the day is over, black people are probably just relieved to see a black actor getting a shake at a popular franchise like Resident Evil, and as long as they’re not a token black guy that gets killed and devoured in the first 15 minutes, they probably won’t care if they’re a protagonist or antagonist, and most anyone who’s ever played a Resident Evil game knows that few are as sheerly unkillable than Albert Wesker.

But white guilters, my god, they must be up in arms at the perceived insult to the black community that a black man is being cast as the main villain of a series.  There’s probably at least 23 SurveyMonkeys out their collating data of racism and unfair prejudice towards the black community, from like-minded white people.  And if Wesker is inevitably going to be played by a black guy, that absolutely means that no white people can portray the protagonists of the series, and dare stand up to further oppress blacks like their forefathers once did.

If they do choose to implement characters like Chris Redfield and Jill Valentine, they most certainly have to be portrayed by Henry Golding and Eiza Gonzalez.  Rebecca Chambers can be played by Zazie Beetz, and I would be over the fucking moon if Barry Burton were played by Erik King AKA Doakes.  That way, Wesker would only be opposed by other minorities, and it wouldn’t create the intolerable conflict of white heroes versus a black villain.

The bottom line is that the answer to the original question is that without any doubt, white people are going to have a way bigger cow over the casting of a black Wesker than any black people.  But wait until they realize that all currently cast roles also feature no white people at all; this might just set out to be the most successful series on Netflix in history, to white folks.