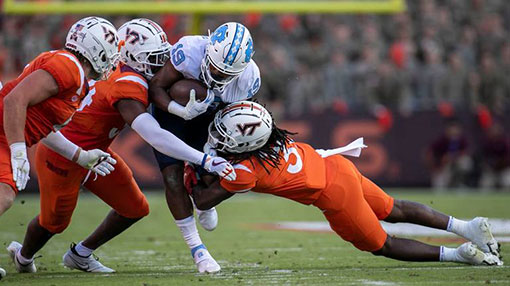 Earlier in the day, my wife and I were on a walk with the kids. We talked about how neither of us knew who our respective teams were even playing for their first games of the season, we’ve just been that busy and absorbed by parenting to have any time to concern ourselves over college football, much less a variety of other things.

She mentioned how tomorrow was the start of the season, but then I pulled the whole well actually thing about how the season had already started for some FCS and D-II scrub schools and how there were a handful of games on tonight-but nobody usually gives a shit about Friday night college football games, and they’re usually just scrubs playing.

An hour later I’m get a text message from my step mother-in-law, saying Go Hokies! and I’m confused so I pull my phone out and check the internet and sure enough, scrub Virginia Tech is opening their season on Friday night, hosting the surprisingly highly ranked #10 North Carolina.  Fuckin’ figures

Anyway, to cut to the chase, Tech takes down #10 UNC, and on day zero of the college football season, it’s the de facto upset of the week, and I would wager that no higher ranked team will probably go down, short of the loser of the #3 vs #5 game between Clemson and Georgia.

For one night only, Virginia Tech stands atop the world of college football, pulling the biggest upset of the season so far. Which will be something fondly to look back on when Tech will inevitably fuck up their season when they lose to like Pitt, or worse off, FCS school Richmond.

But until the annual crash back to earth happens, it feels great to start the season off with a big W against a top-10 ranked opponent, as much of a fraud ranking it may have been, and division rival. 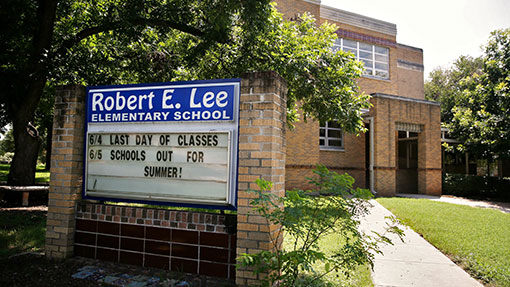 Not sure why this is news: Georgia has the most schools in the country still named after confederate figures

Must be a slow news day or something.  Finding out the fucking Georgia still leads the nation in schools still named after people associated with the confederacy is about as surprising as finding out that it’s still hot in the summertime in September here too.

I mean, why wouldn’t it?  Sure, Alabama is where the Confederate White House is and probably should be the state leading the nation in this category, but I’m just going to swing wildly and throw out that Georgia has a greater black population than they do, and when you have more black people, that means there are more white people who want to try and denigrate them and hold them down, in ways like opening up a bunch of schools named after confederate figures.

Here’s the thing though; and a lot of this is assumption based on a few isolated cases; it’s not so much that Georgia probably revels and takes pride in the fact that they’re the leaders in this embarrassing statistic, it’s probably more the case that as a branch of government, something as seemingly simple as changing the name to a school, still takes eons to do.  Georgia might be #1 in confederate named schools, but it doesn’t necessarily mean that behind the scenes or at a more local level, this isn’t news to the local citizens and parents of students at these schools, and change may or may not have already been prompted.

I live in an area where there’s one particular school that stands out.  For literal years now, the topic of their name emerges, typically from a student that goes there, and typically of a minority background, bringing up the fact that their school is named after some confederate figure.  Then the school and county drag their feet, stall for time, and be typical government, and then these students themselves eventually gradate out and then turn their backs to the SJW-ing they were most likely doing to posture for college and/or attention, and then the conflict kind of resets back to zero.

I’ve only been in my current area for five years now, but I’ve already seen this cycle occur twice.  It’s but one singular instance in state with 45 schools named after confederates, but I’m going to assume that this probably happens at more than just this one.

Which is sad in itself, that it takes kids to get a ball that adults should have already been spinning for decades now, to start rolling, because their time is finite in these schools, and they’re kids; they’re not going to give a shit once they’re gone, because they might actually have more promise and future than the generations before them.  Or maybe not, I don’t know.  But kids shouldn’t be responsible for prompting this change in the first place, but here we are.

Whatever though.  Fortunately for me, my home isn’t in the district of the aforementioned school, so the likelihood of them going there is pretty unlikely, and therefore won’t have to be bothered about trying to answer questions on if they know who their school is named after. 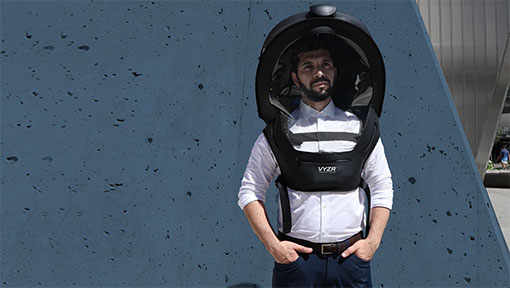 Targeted ads are a funny thing.  I have no idea what was ever said, written or searched for, in proximity of my phone or internet browsing history, but I got this ad on theFacebook for this product that’s basically a giant helmet, meant to be the alternative to wearing face masks in the current world we live in today.

Called the VYZR or some shit, because vowels are so fucking overrated, it’s a giant bubble that straps underneath your armpits, but completely encases your head, neck and shoulders, and has all sorts of filtration and air flow capabilities, but most importantly, allows the rest of the world to see your whole face in its unmasked glory, without compromising the safety of everyone around.

It’s the epitome of ridiculous, but at the same time, I fucking love it, and if they weren’t like $400, I’d totally be interested in it.  Sure, it would basically make me look like the Intel Pentium mascots from the late 90s, but I wouldn’t have to have a piece of fabric strapped to my face, smelling my own breath, hooking on the arms and fogging up my glasses all the time.

And I already know how it would feel, because the general connection apparatus of it is nearly identical to the Mini Mei baby seat for shoulders that mythical wife got me for Father’s Day, and it’s pretty tolerable, and for the sake of being able to safely breathe out in public, I’d gladly strap a giant bubble to my head.