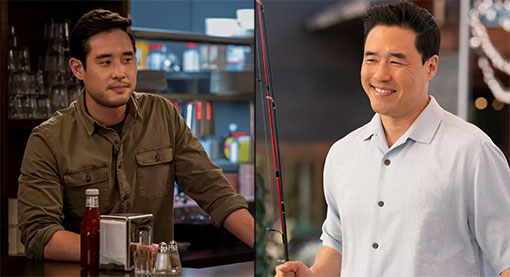 Kevin Can Go F*** Himself – pretty good show.  Very creative execution, surprisingly deep plot.  Annie Murphy is still a snack, even as New England white trash.  Kind of feels like a show that should be on FX and not AMC, but whatever.  Probably because it has a very Wilfred-like feel and pace, and that basically no matter what the main characters do, it ends up blowing up in their face.

But anyway, I’m not writing this to analyze the show, I wanted to talk about something that has popped up a surprisingly high number of times to people I’ve spoken with about the show.  Whenever the character Sam comes up, an alarming (to me) amount of people seem to all think that he’s played by Randall Park.  No, it’s an actor named Raymond Lee.

Yes, they’re both of Korean heritage, and there are some broad physical similarities, but the fact of the matter is that there’s like a 12-13 year age difference and all you motherfuckers who make this error are 100% arr rook same-ing them.

The world and America might think they’re progressing and making some strides when it comes to tolerance, acceptance and more respect for Asians in general, but people still can’t seem to keep their mouths shut when it comes to using better judgment and not trying to compare Asians even when they’re not 100% certain.

Maybe in the near future, Raymond Lee can basically start filling in all the roles that would’ve been meant for a younger Randall Park, kind of how like Mahershala Ali is basically picking up all of Wesley Snipes’ old roles, but until then none of these motherfuckers are the same guy and white people need to stop making assumptions about minorities rooking the same.