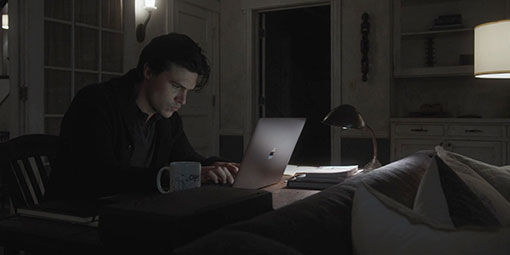 Like the title to this post says, I’m just like, have no idea on what to do in front of a blank document anymore.  I feel like a stereotypical author character in a story who’s got writer’s block, and is staring at a blank word document, with the cursor blinking over and over again, before they resort to more coffee and/or more alcohol, sometimes both.  Most recently demonstrated by Finn Wittrock in the most recent season of American Horror Story.

It’s not that I don’t have anything to write about, quite the contrary, it’s just that I have so many things I’d like to write about, somewhere around 15-16 notes that I took as things I’d like to write about, but it’s been so long since I did any sort of writing or had any modicum of time to do any writing, that I’m just in this state of disbelief and paralysis of not knowing what to do, which is why I’m ironically writing nonsense to try and get myself in the mood to write the usual array of niche-topic bullshit that I tend to write about in my blog outside of bitching about how hard parenting can be sometimes.

I’ve resigned myself to the fact that as long as #2 has no set schedule or routine as she is still but an infant under three months old and cannot be set to such just yet, that I will have no time or no capacity for anything really self-serving or hobbies like writing, that require some time, silence and setting, because I’m really that much of a head case that likes to have such just to write about professional wrestling, baseball, veiled social commentary or any of the rando crap that I write about.

But now that I’m on official paternity leave, I feel that it is important to try and carve out a sliver of time here and there to try and give myself a little bit of reprieve from dad mode, because I know I’m getting short with life in general because I’ve been going too hard too long and without any substantial breaks, and it’s going to do nobody any good if I continue to go on like this without any bit of self-care periodically.

So, I’m going to try and shoe-horn in some writing time in the coming weeks, on top of all of the other things I’d like to accomplish while I’m on leave, like yard work, refinancing my house, possibly researching a bigger car while my current one still has a lot of value, casual job searching, and occasionally getting in a run periodically so my physical being doesn’t deteriorate like Sim City roads and rails when you have to take too much tax dollars away from their budgets.

I will probably sticky this post and supplant the very deliberate sticky of the tragic passing of Sonny Chiba post I made that I’m still upset over, and probably retroactively back-post all the writing of things that I wanted to write about that might still warrant some writing about, and that is if it’s not too late to write about some of the things that might’ve been a little on the more time sensitive spectrum.

Which are always fun-not-fun to write about, because there’s very little chance that I’ll be in the same mental states to write about things when the impetus to want to write about them in the first place might be as much as 3-4 weeks old, or if I already know what fallout/aftermath of particular events might have been.

But that’s the kind of person I am, where I’m staunch and stubborn and if I wanted to write about it at some point, there’s high chance that I’m going to write about it now, and either pretend like it was done live, or hope nobody notices, but most likely the latter since I have zero readers in the first place and I probably don’t need to disclaim this anyway but whatever.