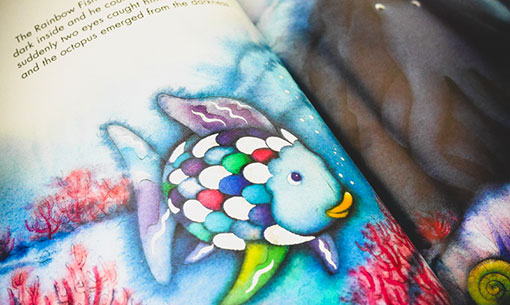 Yes, we’ve arrived at that point of my brog’s timeline where I am using children’s literature as fodder to write about.

Imagine a kid goes to school with a box from Costco, of Butterfinger candy bars.  The full-size ones, and not the annually shrinking fun-size nuggets.  Naturally, their ownership of all these candy bars catches the attention of all the other students, and one day, one of the kid’s classmates comes up to them and asks for one.  Seeing as how there is nothing offered in return, the kid refuses to part ways with a Butterfinger for free.  The classmate is disappointed, and others have witnessed this failed transaction, everyone steers clear of the kid, alienating them from everyone else.

Upon asking for some guidance, it’s suggested that the kid give some of his Butterfingers away, as it might make other classmates happy.  And eventually, the classmate who wanted a freebie comes back to beg for a Butterfinger again, and not liking being alienated, the kid acquiesces and gives them one.  Now classmates all around swarm the kid, and they start giving away Butterfingers to everyone.  Finally they are down to one Butterfinger, but now they have successfully bribed numerous classmates to be their friend.

The kid has basically bought friendships, and everyone seems to be okay with this dynamic.  The end.

That’s basically the story of The Rainbow Fish, except the kid is a fish and the Butterfingers are the fish’s ornate, shiny scales.  All the other fish in the sea avoid the Rainbow Fish, because they aren’t willing to give away it’s scales, which is actually worse than giving away Butterfingers, because fish kind of need scales in order to protect themselves but the point is the Rainbow Fish is alienated simply for wanting to keep their dermis, theirs.

But eventually, the Rainbow Fish gets kind of lonely, but then the wise octopus suggests giving away their scales in order to win favor with the other fish in the sea.  Right there, is a red flag of bad suggestion, as the octopus is basically endorsing bribery, instead of trying to earn friendships through conversation, commonality, or any other organic method.

Unfortunately, the Rainbow Fish heeds the advice and basically rips off their own scales one by one, in order to “earn” friendships with the other fish in the sea, and by the end of the book they’re down to just one last shiny rainbow scale for themselves, but at least they have all these friends.

This is not a positive message to be sending children, and I’m kind of disappointed at the message this is sending kids.  I don’t want either of my daughters to have to buy their friendships by giving away anythings that they might have in their possession that others might want.  I want them to develop friendships organically through teamwork, camaraderie or commonalities, like real, sustainable friendships should be; not by giving their shit away for free.