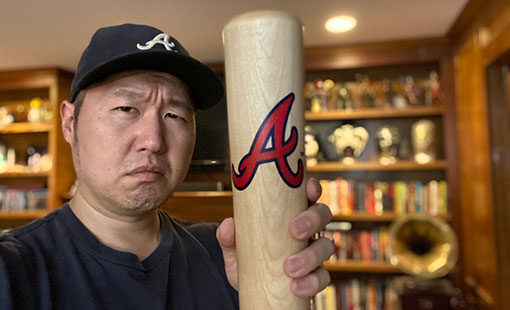 Chris Jericho said it best about the Ultimate Warrior: I don’t know what he said but it sounded cool yaaaayyyyy

Anyway, this isn’t a post about the Ultimate Warrior, Chris Jericho, or professional wrestling, for once.  Those were referenced just to zone in on a single concept, that’s kind of stuck with me, especially when it comes to trying to tempt fate and potentially get the things that I hope to get: sacrifice.

I have this belief that seldom do good things occur without some degree of sacrifice involved.  It’s basically like when kids behave and act good because they want something.  And when I’ve wanted things like, the Braves winning the World Series, I most definitely think that there should be some sacrifice made by all Braves fans, if they really wanted to see a World Series win.

A few weeks ago, I dogged on Dugout Mugs, and basically how I thought they were the most useless products on the planet.  And how in an era of pandemic, wealth inequity, teetering on the precipice of financial ruin everywhere, the absolute last fucking thing anyone needed was a cup made out of a baseball bat.

I wasn’t at all writing all that, in an attempt to superstitiously manipulate fate, and put on a show.  Believe me, I have done it before, and naturally it doesn’t work, but my disdain for Dugout Mugs is very much legitimate.  They’re useless products, AND they have a ridiculously ludicrous $70 price point for a fucking hollowed out bat head.  The Braves winning the World Series would definitely cost me something, that I would never purchase in any other circumstance.

And despite the fact that I made this bet with myself, and probably zero people even read or knew about it, when the Braves finished the Astros, I went ahead and bit the bullet and purchased a fucking Dugout Mug.  Thankfully, there was some sort of promotional deal for early purchasers, and I was able to get my mug for not-$70, but it was still basically the cost of a brand new video game once taxes and shipping were applied.

I didn’t have to do it.  I could’ve denied everything and just said eating my words should be enough.  But when it comes to fates and superstition, I am that gullible, so I believe that it’s probably for the best that I remain a man of my word and fulfill the obligation I made for myself if the Braves were to win.

Considering how long I’d been hoping to see this, $57 is a paltry price to pay, and even if I think this mug and all other Dugout Mugs are bullshit, at least everything will taste something like victory for a little while from it.  Even gross-ass IPAs.