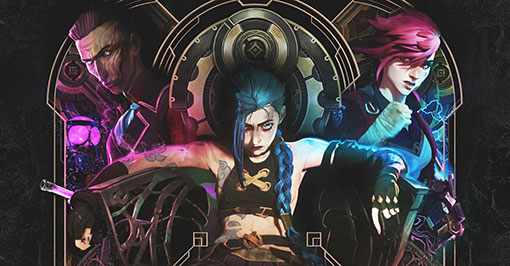 Being an out-of-touch dad these days, a lot goes over my head as far as things coming and going in popular culture.  As big of a League of Legends fan I was back in the day, you’d have thought that I might’ve been more aware of the Netflix series LoL: Arcane coming out but nope, after hearing some mumbles about League and Netflix, I didn’t hear nor pay any further attention, thinking that it was just ear candy since these days, just about every popular IP ends up going into the rumor mill with a project with Netflix.

Plus, as I grew out of League, and then all the allegations of sexist bro-culture over at Riot Games began emerging as if such weren’t already the case at likely every single gaming company in the world, I kind of just stopped caring.  As much enjoyment I got out of the game, it really was the epitome of an abusive relationship, seeing as how players get their ass kicked at probably a 60% clip even if they’re “good” at the game, and they come back for more, over and over again.

That, and one of those don’t meet your heroes kind of mentalities, I remembered and realized all the interactions and impressions I had of those of Riot Games personalities I’ve ever met, and kind of felt there was a degree of smarmy arrogance, that they were all a little too self-aware of their contributions towards the production of League, and then all the allegations of the toxic corporate culture seem all too relatable.

Regardless, when watching LoL: Arcane, all of the critical thoughts and opinions I might have about Rito and the actual game are all kind of washed away while I’m watching the show, and in its place is just simple enjoyment for a clever, beautifully executed series in my opinion.

Jinx (along with Miss Fortune) was easily one of my favorite and most-played champions, so a series revolving primarily around her, along with the general Piltover/Zaun setting was easy for me to be interested in.  And the mass edits to the lore all seemed to come into play, seeing as how I was pretty intrigued to see that the re-imagining of origins have now placed Jinx and Vi as sisters, which can explain a lot of the original animosity between the characters in-game.

I won’t analyze or spoil any of the plot, but I just want to sing the praises of LoL: Arcane, because I thought it was a very well done series.  The brushed painting style of the animation is refreshing and perfectly executed, and the plot is gritty and very much R-rated, which is interesting given how cartoony and lighter-plot the game is.

There are easter eggs galore throughout the series, and those familiar with the game will probably have a fun time picking them out and then hypothesizing on plot points, potential future arcs and most importantly, how they tie into future appearances of recognizable champions.

The first six episodes were so well done, it almost makes me want to get back into the game, as abusive of a relationship it really is.  Then I realize that I’m a dad with no time on my hands anymore, and ponder how I even had as much time as I did in the past to play as fervently and obsessively as I used to.  So instead, I’ll just patiently wait for the rest of the series to pan out, and hope that Rito and Netflix can agree to produce more Arcane in the future, because I think there’s still a ton of lore that could make for entertaining television.