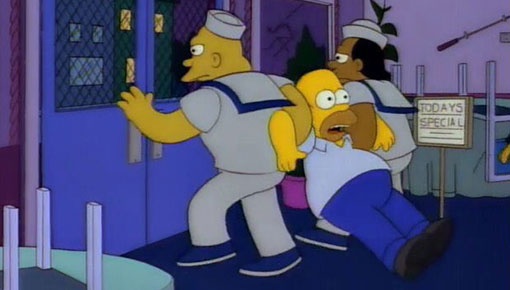 Frankly, there really is no place in the world that this could’ve occurred at then China.  China has no regard for rules, and they’re not above applying draconian outcomes onto their own people, especially when money is involved.  It’s just unfortunate for all parties involved, that The Internet caught wind of this story, because now it’s basically a meme, with all the observational humor armchair comedians that are coming out of the woodwork to chime in their two cents.

Naturally, the initial favor goes and should go, to the customer, whom was capitalizing on the general concept of all-you-can-eat, and it really is not his problem if the restaurant’s golden ratio of food consumed versus cost of meal begins sliding in his favor because he’s a monster capable of consuming large quantities of food.  As far as the restaurant goes, if they’re incapable of actually being all-you-can-eat, they probably shouldn’t be in business in the first place.

But then it’s revealed that the guy in question was a live-streamer, and then I feel like there’s a lot of context that kind of went missing in the bigger picture.  I think it’s safe to say that Mr. Kang here, was probably going to the restaurant, partially to eat a meal, but at the same time, ham shit up for his six viewers, by acting a little bit outlandish, and eating beyond normal, for the entertaining of others.  Now, from the restaurant’s standpoint, I can kind of lean towards them, because based on their description of how Mr. Kang would pick up the entire tray of prawns instead of using the tongs, that sounds like a dick move done deliberately, for the lulz, but is also fucking all other customers in the restaurant from getting any.

Sure, Mr. Kang wasn’t wasting any food, but at the same time I have a hard time believing that he was pounding away 3+ lbs. of pork trotters or downing 20-30 bottles of soy milk because he was just that hungry.  No, live-streamers are inherently attention whores, so he was probably stuffing his face for the camera, and most likely most definitely didn’t need to be eating that much food.

There are definitely ways to exploit buffets, most obviously being, don’t make a spectacle of yourself or draw attention to the fact that you’re trying to stay and eat the place out of business.  I used to see senior citizens at Old Country Buffets in the past, who undoubtedly were there for upwards of three hours plus, because they probably got in the door when it was senior-priced breakfast, but milked the clock to where the more expensive lunch options began emerging, and then had multiple meals while there.

But by making a spectacle of himself by grabbing entire trays, or running trains on soy milk, and undoubtedly bringing camera gear to his table, Mr. Kang ends up looking like a tool, the restaurant looks like assholes for denying someone all they can eat, and in the end, everyone loses, because lol China, of course.

Not going to lie though, all this thinking about Chinese buffets makes me miss the ever-living hell out of them.  Coronavirus be damned, I’m quite tempted to take the risk and go find some rando-China King Buffet and stuff my face stupid of lo mein, General Tso’s chicken, crab rangoons of doom and of course, chicken quesadillas.

When Seth Rollins began calling himself “the Drip God,” I was curious, but didn’t really think anything of it.  Then, on an episode of My 600 Lb. Life the blob of the week’s son was wearing a shirt that just said DRIP on it, and it jogged my memory that I was curious.

I asked mythical wife if she knew, since she works with kids every day, that she might have picked up on some of their slang, but she didn’t really have any idea either.

So it was off to Google to find the answer for me, and I discovered that it was, of course, coined by some of today’s (c)rappers, and it’s to describe what used to be classy, swag, or just plain stylish in layman’s terms.  Sure, it makes not an iota of sense to me, and sounds fucking dumb, but at least I knew the general context of what the kids are calling drip these days.

But that’s when I realized just how much of an old man moment I just had, being so out of touch with new slang, that I had resorted to Googling it, in order to find out.  Given its general idea and origins I kind of wish I hadn’t, but when the day is over, I’d rather be in the know than not, even if it’s subjecting myself to stupid trash slang.  I guess that kind of mentality is prolonging the inevitable aging and separating from the generations beyond mine, no matter how in touch I may or may not try to be.