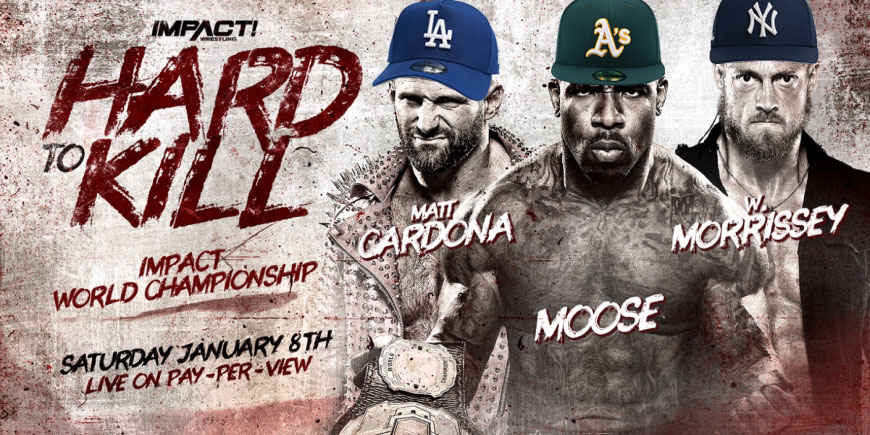 I can’t say that I’ve ever watched much Impact Wrestling in my lifetime, whether they were NWA-TNA, TNA, TNA-Impact, Global Force Wrestling, or whatever iteration the promotion ever was under the ownership of the Jarretts, Dixie Carter, or whomever.  The peak of my viewership of the product was when a distant acquaintance and former schoolmate of mine, Sonjay Dutt was a regular performer, and I was curious to see a guy I went to grade, middle and high school with, live out the dream he always had as long as I had known him, in being a professional wrestler.

But in this day and age when professional wrestling seems to be doing pretty well, with the WWE and AEW sitting comfortably on top of the industry, there are all sorts of tiers beneath  the top of the mountain, and if I had to make a pick, Impact Wrestling would probably be the #3 promotion in North America.  Followed by other promotions like the NWA, maybe Ring of Honor again one day, along with a litany of even smaller independent promotions.

Much is being made these days with all the talent that’s been liberated (read: fired) by the WWE, and how AEW is hoovering up many of the names as soon as their non-compete clauses expire.  Personally, I think AEW’s roster is bloating to unstable proportions, but they’ve yet to collapse under the weight of their talent and their payroll yet.

I saw the card for Impact’s Hard to Kill PPV, and thought that damn, that’s a pretty loaded card.  Numerous championship matches, and what I really like is how Ring of Honor champions are just kind of randomly showing up at other promotion’s shows, to defend ROH blets, and Jon Gresham only adds to the credibility of the card.  In a different point of my life, I’d literally drop what I was doing and hop on a flight to Dallas to try and watch this with my brother, that’s how decent of a show I think this has the potential to be.

AEW has been doing a lot of impressive stuff over the last few weeks, and I hear the chatter, but as I’ve made fairly clear that I just have a hard time caring about the things they’re doing.  In all fairness, I have a hard time caring of what the WWE is doing lately too, but the difference is that I still have Peacock access and can see their PPVs.But despite my general ambivalence towards Impact historically, I’m finding that I’m rooting for them in the midst of all these wrestling promotional battlegrounds.  And I made an analogy that made more and more sense the more I thought about it, and I have to say that I think it’s pretty accurate.

The WWE is obviously the Yankees; they have money, they have history, and they’re the biggest baddest franchise in the business.  AEW is the Dodgers, who are blending all sorts of new-school strategy and flinging obscene amounts of money out on the market to bring in top-tier talent to bolster their roster, even to excess.  But that makes a promotion like Impact, the Oakland A’s, a cash-strapped promotion that does well enough, but has to really maximize the value out of every asset they have and try and play smarter than the richer competition in order to survive.

And when it comes to sports fandom, who doesn’t appreciate the plucky underdogs, especially when going up against the big bad rich opposition?  Hoping for Impact to do well has no consequence or conflict to any allegiances if I had any, and when the day is over, the successes of other promotions outside of the WWE and AEW are better for the industry as a whole.

Whenever wrestlers are released from WWE, most of the time I’m usually like, man that guy/girl would be perfect for New Japan, or Impact, but just about everyone ends up in AEW, due to the money they’re flinging.  I don’t hide that I have these general ideas about promotions, and I think most big white oafs always stand a chance at being the next big bad foreign heel in NJPW, and if there’s one thing that Impact has always done well historically, is that they’ve always cultivated good women’s wrestling.  Even long before the WWE did, Impact doesn’t get enough credit for their contributions to women’s wrestling, and Hard to Kill has some pretty good women’s matches on deck that I most definitely wouldn’t take a piss break through.

Almost makes me think I should perhaps seek out some replicas of the Knockouts Tag Blets, so that my girls can be double champions.