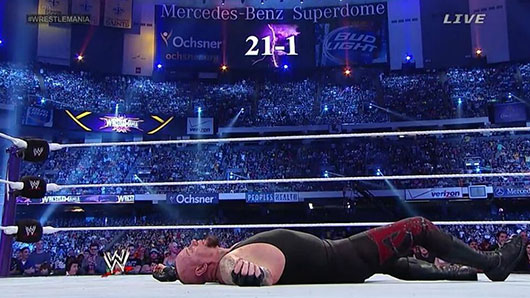 One of the many things I hate about very likely having COVID is whenever anyone insinuates that it’s remotely close to okay, because the infection numbers are so rampant that it’s almost inevitable that everyone will have caught a variant of it at some point.

My response to that is that a loss is a loss, and there’s no wiping a loss from your record, no matter how successful you are afterward.

Because I’m me, everything is an analogy to sports or wrestling, and the way I see it, everyone who has managed to evade COVID as long as I and my household had, was basically undefeated.

Fewer things in competition are as hallowed as undefeated streaks, and there’s little more frequent narrative of a streak to inevitably break, with it growing more and more value the longer it goes unbroken.

And in my head, every single person who has managed to go without COVID since it came into existence, y’all are also undefeated.  And up until a week ago, my wife was.  Up until more recently, so was I.

No, it isn’t the end of the world. My wife will recover. I will recover. We could thrive afterward. But it’s still a loss on our records, and that will never go away.  And I fucking hate it.

Back in like 1995, I was playing a season NBA Live ‘95. I wanted to have a season where the Orlando Magic went undefeated with my Penny Hardaway having 100% field goal percentage and averaging like 169 points a game and a triple-double.  I put a lot of time into it, but after about 30 games, the game apparently didn’t like such unrealistic conditions, and next thing I knew, I had a loss to the Seattle SuperSonics on my record and my Hardaway’s numbers were all tarnished.

I quit the game.  That and-1 was a loss that I couldn’t expunge no matter if I won every single game afterward.  It ruined the ultimate goal.

Having the ‘Rona brought into my home and infecting my household makes me feel like the 2007 Patriots.  We were doing so well, only to be derailed and defeated by an unlikely party.  And the worst part is, I highly doubt the offending party realizes just how much they’ve fucked us.

Whereas they can go home to a childless environment with nobody but themselves to care to recover over, or any real demanding jobs to go to, mythical wife and I have two young kids to be mindful of, boatloads of duties that still have to get done no matter how addled we are; on top of our respective jobs.

Ask any parent how it feels to have to deny their kids an embrace that they want, and tell me that it’s still “fine” that “everyone’s going to get it eventually.”  Don’t try and calm me down with that bullshit reassurance that everyone will get it or that Omicron isn’t as lethal, because I will tell you to go fuck yourselves.

Life is already very difficult as it is right now, but to throw fucking coronavirus into our mix, sounds like a pretty crushing loss and way to end an undefeated streak in a terrible fashion.  I will always resent it, and unlike a video game, this loss on the record is permanent and there’s no turning off and quitting it.