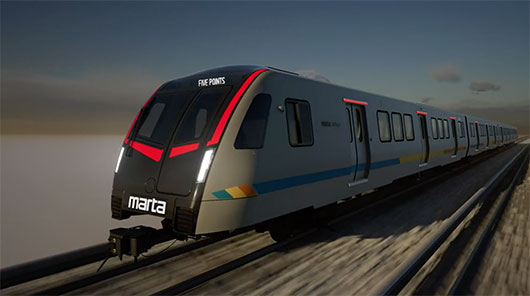 It’s been a while since I really wrote anything about anything other than me being depressed, fatherhood, jobs, sports or wrestling, and if there’s ever a topic that gets me all amped up to write, MARTA would definitely be up there.

When I saw this article about how MARTA unveiled new trains, my knee-jerk reaction was to get my clowning shoes on, because just from the text description alone, I figured that there had to be ample opportunities to get back up on the horse and do some clowning.

Honestly though?  After actually taking the time to read the article and see the proposed designs and functionality of the new trains, I don’t really have that much room for clowning.  Although the face of the trains look like a cross between Daft Punk and like a Cerberus shock trooper from Mass Effect, they still look pretty cool, and I think the dynamic light function to indicate the route they’re on is a cool idea.

The interior of the trains have finally come into the modern era, with their being truly connected trains, and no longer there being physical doors leading to exterior access as beggars traversed from car to car.  There is still a lot of room for error when it comes to if people have specific needs for which car they need to get into because of strollers, bikes, or wheelchairs that will have to have some training applied, but at least it’s a start that the cars are actually going to have some variety and not feel like they’re the leftover train cars from the 1980’s DC Metro.

So as ready as I was to get ready to rip this concept apart, I actually don’t have much fuel to burn.  MARTA’s trains have desperately needed updating for nearly two decades, and it appears that it’s finally happening.  Sure, their stations need a lot of attention too, and the general perception of the service and brand seem irreparable, but finally upgrading the trains is a step in the right direction.

However in spite of the upgrades to the hardware, the real question is going to be if MARTA’s actual performance improves, with new trains?  The trains might be shiny and new, but the people running them, and the people riding them, and the stations they’re stopping in and out of aren’t going to be changing that much, and those are the variables that are going to come into play as far as trains remaining on time, hopefully dependable, and not too much the breeding ground for World Star videos.

If so, great.  If not, then still great for the brog, because it’ll be good fodder seeing photos and videos of these brand new fancy trains in the news, where petty crimes, stupidity and some very Atlanta-centric behavior gets the spotlight all the same.