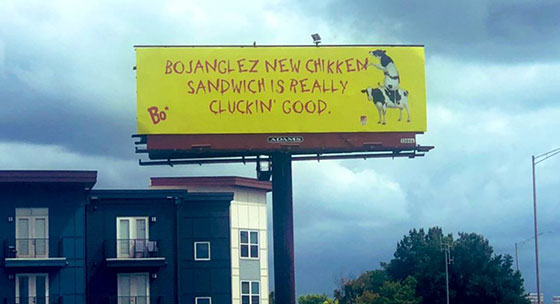 I heard from one of my new colleagues about this, and I had to google it to try and see with my own eyes, because I hardly leave my house in the first place.  Fortunately, photo evidence of it exists, and yeah, it’s everything that was described to me, and I’m pretty much in awe.

Basically, Bojangles has decided that they give no fucks about copyright or decorum, and has erected this giant billboard off of I-75 that flagrantly uses lightly modified versions of the Chick Fil-A mascot cows as well as the Chick Fil-A typeface, in order to push awareness of their supposed new chicken sandwich.

Which is funny to me, considering I would’ve figured they’ve had one for the last three decades, considering they’re a chicken joint, and they could just as easily take the slabs of chicken used in the cajun filet biscuits that I get exclusively, slap them in between an actual bun with some sauce and pickles, and call it a signature sandwich.  Or maybe they have, and are just releasing something a little in competition to all the other chicken joints’ signature chicken sandwiches, who really knows.

Anyway, this is somewhat notable considering Atlanta is the home of Chick Fil-A, so Bojangles marching into the metro area and propping up a billboard like this really should be a declaration of war to some degree.  But as entertaining as it would be to see an actual war brew between fast food chicken joints, we obviously won’t see anything as flagrant as this in rebuttal, unfortunately.  And Bojangles probably knows that, which is why they did it, because to the public eye, a shot like this that goes unanswered, is a point for them.

Either way, I hold no ill will towards either company, and I enjoy their products both.  Bo’s biscuits on Sunday mornings is practically a tradition in my household, which is the perfect thing to fill the void when Chick Fil-A is closed.  But Chick Fil-A’s app is the gold standard in which all fast food joints should aspire to be, and a large reason of why I go there as often as I do, as it saves me time and aggravation, two things that are in short order when living the life I do these days, all while amassing reward points for more free shit.

But make no mistake, as far as public score keeping goes, this is a huge point for Bojangles in the supposed Restaurant Chicken Wars™.  It would be nice to see CFA respond, but everyone knows they probably won’t.  At least not in Georgia.  It would be fun to see if they drop some cheeky billboards out in Charlotte, if they already haven’t.