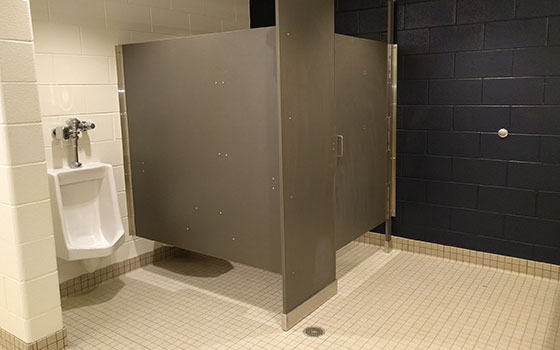 One of the… no, it is definitively the best aspect about returning to the office, is the fact that I am able to get back to the gym, by virtue of the modest but adequate little gym inside my office’s building.  It’s free for tenants, has showers and complimentary towels, and the best part is that it’s hardly ever used.  Since I’ve been working out there, the maximum number of other people working out at the same time has me has never exceeded two people.

However, in spite of the fact that there aren’t a lot of people who work out on the regular as I do, the gym doors, are still somewhat commonly opened and entered, by people who believe the gym restrooms are the best place to poop.  Presumably they’re thinking they’re the most private, or least frequented, so that they can drop a deuce in perceived peace and cleanliness, but I don’t think any of these bozos seem to understand that I’ve already witnessed a number of people who use them that’s high enough for me to not even consider them myself if the need arises.

For those who have never had the opportunity to be mired in Office Space life, one notable behavior that most people don’t like to talk about but exists because everyone poops, is that people have a tendency to try and be discreet and do their work-time pooping on the down-low.  Either by coming in early, staying late, or in most cases with larger facilities, seeking out the bathrooms that are away from their daily peer groups, tucked away for privacy and/or sanitary reasons, or all of the above.

A Where’s Waldo of sorts, of the “best” bathrooms in the building.  I have a bathroom in the building that I think is the best bathroom for my needs.  It’s hidden behind the mailroom and based on the fact that most every time I go into it, I’m the one triggering the motion-sensing lights, which lets me know that nobody’s been there for a while, or the toilets still have the tint of green water from the last time they were disinfected.

Point is, everyone who works in an office probably has in the back of their mind, the bathrooms they like to use when they want some privacy and piece of mind.  And in my building, I’ve noticed that quite a number of people seem to feel that the gym bathroom is that bathroom for them, but unbeknownst to them, they would be sorely mistaken.

The men’s locker room has one toilet stall.  One.  Regardless of if I knew this wasn’t a good bathroom or not, I personally don’t like those odds, and wouldn’t consider it.  Presumably, the women’s locker room has two, due to the lack of need for a urinal, and make no mistake, women come into the gym to poop as frequently as men do, but at least they can hedge their bets with two toilets presumably to pick from.

Regardless, much like NASA gathers data on the all-relevant to space exploration conflicting between alligators versus sharks, solely based on the fact that it’s an interesting behavioral  anomaly that occurs near their Florida facilities, I have decided to start collating data of the pooping habits of the people in my building, who pop into the gym solely to poop, thinking it’s a nice and private bathroom for them to use.  It’ll be a fun little statistical gathering to see if any patterns or factoids emerge from it, and if anything all, just another topic I can dip into to write about in the future.

I also like to smugly meet the eyes of the people who come into the gym to poop; they know that I know what they’re doing, because they always roll in with no bags or gear, and beeline for the locker rooms.  If I weren’t masked up, they would see the facetious smirk on my face when they’re on their way out, because they think they’re being clever and pooping where it’s nice and safe, but based on the revolving door those poor toilets are, they might as well be crapping in a porta-potty during a marathon weekend.