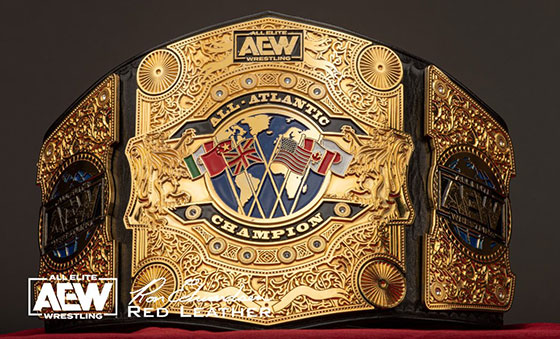 As if AEW needed any more blets to clog up their roster of 189 men and women, they went ahead and introduced a new, not-an-intercontinental championship, called the AEW All-Atlantic Championship.  It’s first title holder will be crowned at the AEW x NJPW Forbidden Door show later in the month, by virtue of a tournament, which I’m sure will be decent, but Tony Khan just can’t stop dipping his fingers into the cake to make everything so convoluted.

The best part about the whole tournament is the fact that of all eight of the guys in it, only two of them, maybe four if you consider Mexico and the Netherlands as actual Atlantic-facing countries, with Rusev Miro, Buddy Murphy Matthews, and two TBD NJPW all coming from the very Atlantic Bulgaria, Australia and most likely Japan.

Interestingly, there are no Americans in this tournament, which is probably Tony Khan’s insistence, to really drive home the fact that this isn’t an intercontinental championship, as if there were something actually wrong with it, considering the IC champs in both WWE and NJPW are usually the best workers of the respective companies.

But make no mistake, this is very much the AEW equivalent of an intercontinental championship, and it’s fitting that it showed up after Cody Rhodes left the company, because he was always so adamant that there would be no such things as “mid-card” titles in AEW, because they were all important, from the bullshit non-sanctioned FTW championship, and all of the Impact, ROH, IWGP and NWA titles that have gotten screen time on AEW programming.

And it will be vied for by mid-card talents, since the actual AEW World championship is really reserved for those willing to play ball with the Elite, which has remained a very tight-knit circle since the inception of the entire promotion.

As for the design of the blet itself, seeing as how I am an aficionado of professional wrestling blets, it’s pretty mediocre, at best.  The plates are too tall, and anyone who knows anything about blets knows that vertical plates are typically frowned upon, because it makes the blets very difficult to wear, most notably the old ROH Television championship being the prime example; the height of the center plate dug into the abdomen as well as the crotch of anyone who tried to wear it and do any sort of bending at the waist.

I’m very perplexed by the incorporation of the Chinese and Japanese flags, as they are so very much Pacific countries, and what they’re doing on a blet claiming to be All-Atlantic.  And then there’s not one, but two lions from the UK’s royal coat of arms, which is again confusing considering the true crest features one lion and one horse.

The font of “All-Atlantic Championship” is the exact same one used in the old WWE US championship, adding to the irony of how this isn’t supposed to be an intercontinental championship, considering the US championship basically was WCW’s equivalent to the IC title too.  The font selection is also funny, because the V2 of AEW’s Women’s championship used the same font as every IWGP championship blet, adding more fuel to AEW’s blet creator’s lack of imagination.

And speaking of the AEW Women’s championship, it’s hard to not notice that the All-Atlantic is kind of a larger scale of it, primarily because of the large four circles at the corners of the center plate, as well as the overly tall plates in general.  Granted, it’s a large improvement over the original Women’s championship, but now it’s starting to look like AEW’s blet maker has created a template in which all future AEW blets will be based on, so when they inevitably introduced the Trios championship they keep churning the rumor mill about, I’m sure it’ll be a derivative of these two.

Overall, everything about AEW’s All-Atlantic championship is about as sloppy and poorly thought out as much of the promotion’s general booking.  It’s kind of a perfect metaphor for the promotion itself; kind of borrowing a lot from rivals and predecessors while trying too hard to be unique but making a lot of embarrassing mistakes in the process.  But the blet is shiny and new, and much like Chris Jericho once said about Ultimate Warrior promos, it (looks) cool, so… yaaaayy will be the general feedback from casual fans and AEW diehards.

As for predicting the title’s first holder, of the eight men vying for it, I think it’s ultimately Neville Pac’s to lose, and he’ll defeat one of the mystery NJPW guys for it.  Although it would tickle me pink if an actual Japanese guy from NJPW were the first guy to hold a new AEW championship, and it’s not an outlandish outcome, considering the working relationship between the promotions, it would be a good time for AEW to scratch NJPW’s back for a change and let them walk off with one of their blets, considering how strong NJPW has been booking AEW talents over the years.  But it would be funny if a Japanese guy were to be the first holder of an All-Atlantic blet.

Frankly though, I feel like there is a possibility that MJF is walking out with the All-Atlantic.  As murky as they’re trying to make the waters with MJF’s nuclear promos, I still think it’s a work, and somehow and some way, MJF is walking out of Forbidden Door with a championship.  He’ll be “fired” by AEW for his recent worked shoot conduct, and then immediately “hired” by NJPW and enters the All-Atlantic tournament under their banner, and does his usual schtick of using the Dynamite Diamond ring to cheat to win the All-Atlantic blet, where he can rub it in AEW’s face for being the first holder of it.  He also strikes me as a guy who was probably fan of all the intercontinental champions of history, and would love nothing more than to build his own legacy with AEW’s own intercontinental blet.

Not a bad place to start while he bides time for his contract to end so that he can go be a jobber in New York.