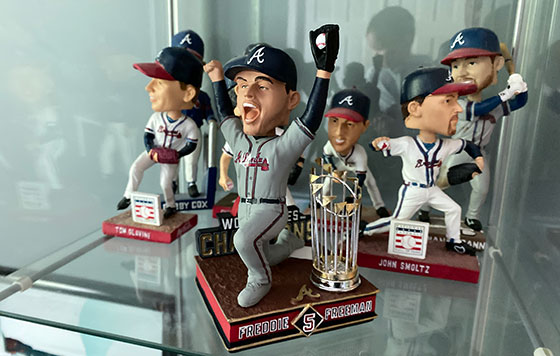 When I saw this bobblehead on preorder, it was during a time when it was all but assumed that Freddie Freeman was going to re-sign with the Braves.  After all, he helped deliver a World Series, he loved Atlanta, Atlanta loved him, and there was no logical reason why he shouldn’t stay with the team.

The thing is though, I’m really bad at spending money, and I often times don’t pull the trigger on things that I want, despite the fact that I’ll have a tab open for something for eons and refresh it daily, hoping for god knows what, maybe a fucking free button or something.  But more often than not, I wait too long, something goes unavailable, and I’m left wondering why I didn’t just purchase it from the onset.

Such, was the case with this one, and after weeks of looking at it and telling myself that I needed to get it, I didn’t, and then the preorder window closed, and I was left wondering why the fuck I didn’t pull the trigger on something again.

But then a strange thing happened, the Braves traded for Matt Olson, signed him to a massive extension and then Freddie Freeman signed with the Dodgers, shattering hearts all across the state of Georgia.  For some reason, I still hadn’t closed the tab to the Freeman bobblehead, and on one day after the Freeman departure, I refreshed and it looked like preorders were suddenly available again.  Despite the fact that I was sad as hell that Freeman was gone, I still felt that I needed this bobblehead, to cap and commemorate an occasion I had waited my entire Georgia-residing life for.  I might more or less be out of the bobblehead collecting game, but this was still something that I felt I needed for the small collection that I’ve actually kept on display.

And it finally arrived this week, rekindling all of the emotions and thoughts of the whole Braves-Freeman separation.  The Braves are playing pretty well, and the Dodgers are leading their division, with Freeman playing well himself.  It is a distinct reality that the two could end up meeting up in the playoffs again this year, which would be all sorts of a drama bomb if it happened, but I’m in a position in my life where it doesn’t really matter anymore.

But still, as happy as this bobblehead makes me feel, to remember the instance where I finally bore witness to one of my teams winning a championship, it’s still also a reminder of the sad events that occurred afterward that closed the window on what should’ve been a memorable and maybe successful title defense and an open window of Braves success.