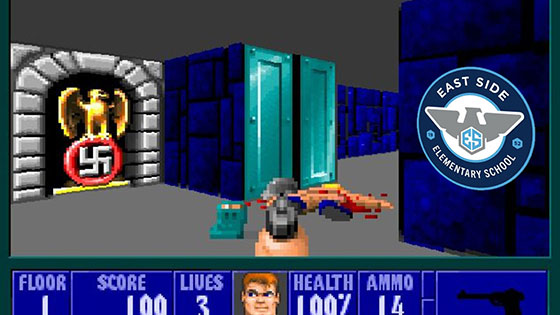 Seeing as how mythical wife is an educator, I’ve become more familiar and cognizant of many schools in the Metro Atlanta area by osmosis, and I actually know of this particular school in question.  East Side Elementary is right off of GA-120 which is a pretty major thoroughfare, and I pass by it regularly, despite not knowing what the name of said school was until I read about where it was located.

But man, talk about a major, major, major fuck-up from this rebranding.  Whatever designer(s) they utilized to come up with this inflammatory design really needs to be scrutinized from a character standpoint, because either they’re some deep-repressed bigots, bigots that think they can pull the wool over the public, trolls who thought it would be a real gas to sneak in Nazi symbolism, or a little bit of all of the above.  However, seeing as how it was still government work, it can probably be safely assumed that the degree of creativity wasn’t particularly high.

When mythical wife showed me these logos, I immediately recognized the red flag, because when I was a wee lad, I played a lot of Wolfenstein on my 486, because it was about the only game it could handle, and Nazi eagles were all over the place.  Imagine my mortified and amused surprise to see something so close to Nazi symbolism, being used to represent an elementary school.

The best part about the trio of logos that they moved forward with, the only element that remained consistent between them all, was the Nazi eagle in the middle of it.  Complete with a monogram that replaces one of the S’s in SS with an E, to suddenly stand for East Side.  Like they were very insistent that of all the elements to be concrete, it had to be the Nazi eagle.  Font, shape, dynamic, all flexible, but nah dog, we GOT to keep that Nazi eagle intact.

To add insult to this embarrassingly ironic design faux pas is the fact that East Side elementary is literally next door to a synagogue.  Like very literally; not down the street literally, or catty corner literally; the school parking lot, if you go straight out of it, you will run right into a synagogue literally.

Furthermore, this is about one of the whitest parts of East Cobb there is, and that’s saying something considering just how white East Cobb already is.  The neighborhood has “country club” in the name and is flanked by a golf course, and I’ve driven through and picked up cheap/free shit that rich white people were peddling on Facebook marketplace, so I’ve seen first-hand how elevated white it is compared to the rest of the town.

None of it helps feed the narrative of a lily-white community being so dense and ignorant as to not notice their neighborhood elementary school adopting Nazi imagery to be a part of their logo.  In the end, I don’t think the school or community is really that Nazi, so much as the person(s) who developed these logos, probably have some explaining to do.  But what’s done is done, and the internet never forgets, so it’ll be etched in stone that there was a school in Cobb County that was almost branded with Nazi eagles.  hashtagGeorgia hashtag’Murica