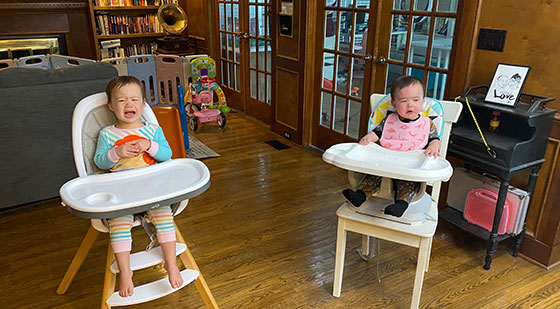 My current routine is to wake up at 7:10 am, every single day of the week, regardless of if I have to work or not, with the objective of having the kids’ breakfast ready to serve by the time I get them at anywhere from 7:30–7:45.  Preferably with me waking them, because if they wake up on their own, it usually means something is wrong, and by something is wrong I mean that one of them has probably shit themselves.

Believe me, there have been mornings where it has been both, and those are wonderful times.

However the thing is, every single morning is kind of a race against a clock that I can’t see and know how much time is left until zero, where, usually #2, wakes up on their own.  Which is never peaceful, or cute babbling on the baby monitor, resulting me in wistfully looking at my youngest with love and admiration.  No, it’s always with crying, and mornings like today, instantly going all the way to 100 on the rage scale within seconds of waking up.

I try not to compare my kids, but it’s unmistakable that on #2’s character sheet, emotional sensitivity is at a 100 out of 99 and that she is without any question, a massive crybaby.  Everything is worth going nuclear over, everything results in screaming, snot and tears, and the only things that can quell them is if one of her parents drops everything they’re doing and probably need to be doing, and picking her up for some snuggle therapy.

Usually at this time, #1 either gets jealous and starts blowing up herself, or she’s capitalizing on my inability to do anything else and runs off and gets into some mischief that I’m put into a Sophie’s choice of stopping my eldest from some form of damage versus allowing the crying machine to explode again, with ten times out of ten usually resulting in putting #2 down to where she blows back up again to stop #1 from hurting herself or hurting something important.

By the time I get the two of them in their high chairs with food placed in front of them, I’m already burned out because my daily allotment of patience has been reduced to a stump over 30~ straight months of waking up to deal with the first shift of parenting, and I’m typically on the verge of a breakdown and chanting to myself that I don’t have enough help and I don’t know what can be done about it and that for just one fucking day, want to not have to do, this.