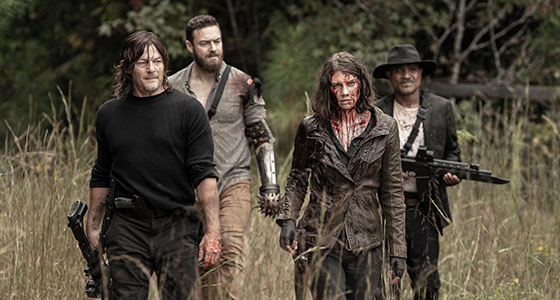 To think I was just about to write about congratulating myself on how I’ve overcome the insurmountable adversity of never having enough time to actually indulge in watching tv and keeping up with the litany of shows and films that I want to watch, but how I somehow heroically found the time and desire to watch what I thought was all of season 11 of The Walking Dead, I find out that not only have I not completed it, the season resumes, literally this coming weekend, and suddenly I’m in a position of where I now have to wait along with everyone else to finish out the series a week at a time.

Either way, I have to say that it’s probably for the best that this is the final season of TWD, because going through the eleventh season of this show, I couldn’t help but feel that the show was basically, at an architectural level, Dragon Ball Z.  The cast runs into bad guys, overcomes hardships and defeats them.  And then they run into badder guys, overcomes hardships and defeats them, and so on and so on.  There’s literally no end to the revolving door of big bads that enter the lives of the main cast; from the Governor, to Negan and the Saviors, to the Whisperers, and now the Reapers, and the white collar bads in the Commonwealth.  It’s simply a formula that can’t expect to chug along and succeed, especially if you’re not actually DBZ.

And the show has been playing this corporate downsizing game over the last few seasons, where, I don’t follow the show politics and cast drama at all, but one by one, key carries to the show have been removed from the show, and it’s like the show is trying to see how many they can write out and expect others to pick up the slack and keep the show compelling.

It was a bold move to write out Rick, considering he was basically the sun and moon of the show since the beginning, but then removing Michonne seemed reckless, especially in the manner in which she departed the plot, but it’s abundantly clear, at least to me, that part of the slog of season 11 is simply the fact that a cast revolving around Daryl, Maggie, and Carol just can’t shoulder the immense load.  Don’t get me wrong, I love the Negan storyline, but Rosita, Gabriel, Aaron and Eugene aren’t at this main event level in which they’re expected to perform at, and the OG cast is just stretched way too thin to keep this ship steady for much longer.

I’m anticipating some sort of payoff in the form of the return(s) of Rick and/or Michonne in the final eight episodes, but I also feel like that there’s this final season of Game of Thrones problem in play, because cards on the table, everyone knows that this is it now.  Eight episodes until oblivion, but there’s a lot of plot, lot of loose ends that are still unresolved, and probably still a lot of deaths of some substantial players that have to occur in order to get those pipe bombs everyone wants from dramatic storytelling.

And much like shows like Dexter, Breaking Bad, and even Rurouni Kenshin, TWD seems inevitable that they’re going to be winding down their television existence on a downhill slope of a weak adversary waiting at the end of production.  Negan and the Saviors were undoubtedly the pinnacle of antagonism in TWD, the equivalent to the Trinity Killer, Gus Fring and Shishio.  And the series has been gradually tilting downward since they peaked.  It’s an interesting strategy on how they’ve been trying to rehabilitate and redeem Negan, but even he can’t change the fact that Lance Hornsby and the Commonwealth aren’t basically the equivalent to the generic white supremacists that Walter White ended Breaking Bad with.

I digress though.  Just when I thought I could heroically remove TWD from my watch queue, it’s two more months of slow releasing episodes, instead of leisurely binging it like I had been doing over the last weeks, but at least for a rare instance, I’m actually caught up and can be on top of watching the crawl to the end along with people I won’t want to know their opinions and analysis with, but at least I’ll be less apt to be spoiled if I’m watching remotely at the same time as others.

But I will enjoy filling out any character death Bingo sheets if any start to emerge in preparation for the end of the series.