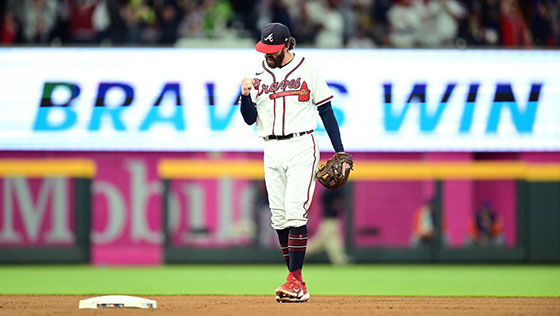 But this is one of those situations where I feel like the narrative of the Braves charging from behind to basically (almost) steal the division in the last week of the season, by also vanquishing the Mets in the process is something that’s happened before, but a little bit of fact-checking myself shows that even during the streak of 14-straight division titles, the only times the Braves have pulled the magic act of winning the division at the end of the regular season has only happened twice; and only once during my lifetime, barely, in 1982.

All the same, there’s something magical feeling about how the Braves’ season has been, because it feels like something that shouldn’t have happened at all.  The Braves were in the spotlight for all the wrong reasons at the start of the year, most notably with the Freddie Freeman drama which I still feel some salt over, but like in all things sport, winning tends to make people forget about bad things pretty quickly, and winning 100 games definitely eases the sting of losing a franchise guy because the ownership is too, Braves-ey, which is to say stick up the butt cheap as fuck.

Matt Olson, the replacement to Freeman, has basically shrugged off all the expectations and the act he had to follow and delivered everything he was hoped to contribute with a 30HR/100RBI season.  Impending free-agent Dansby Swanson has gone bonkers this year is playing very much like he knows he’s about to get paid this winter, more so, the better his statistics look at year’s end.  Austin Riley has rewarded the Braves’ faith in him by delivering another monster season, and much like some of the Braves of old, the kids have come to play, with rookies Michael Harris, Spencer Strider and Vaughn Grissom playing like they hated the minor leagues and absolutely refuse to get sent back down.

There was a point in the year where the Braves were literally 10.5 games out of first, and I’m thinking, welp, we’ll always have 2021, baby luck, etc, etc, and feeling kind of liberated that the Braves sucked, and that I didn’t have to give any care to them.  But then everything started clicking, the Braves won 14 games in a row at one point, and have been playing over .650 ball after the all-star break and suddenly every day now warrants casual glances at the standings to see where the Braves stood, as they closed the gap on the Mets, who honestly never seemed like they were ever losing in their own right.

It became apparent that this final weekend series was going to be the season for both teams, and if the Braves wanted any chance at all to win the division, they were going to have to take care of the Mets themselves.  Leading up to the weekend, it didn’t seem like either team was willing to blink, and most every day was like Braves win, Mets win, no change in the standings, except when the Braves flubbed some games against like the Mariners and Giants.

And even though the records were tight, with only six games remaining, it was pretty clear that the Braves had to win the series in order to have any chance at winning the division, because the Mets’ roster is good enough to where the paper their lineups were written on were more than competent at beating the rebuilding Nationals to end their season.  Frankly, like all Braves fans, I was hoping for 2/3 games, but mathematically that was still dicey and would require a little bit of help on the back end.

But a sweep?  No fucking way.  The Braves have become a good team again, but the Mets have been the torch bearer of the division all year long.  It’s actually kind of flabbergasting that the Mets would have shit the bed at such a critical point like this, because with Jacob deGrom and Max Scherzer pitching the series alone, those two should have been automatic wins in their own right.

Like, the Mets getting swept and basically losing the division in the final week of the season, almost makes me feel bad for the Mets and their fans, and I actually kind of feel bad for wanting to go into my metaphorical storage bin of past fandoms, opening it up, opening the folder for baseball, and pulling out a sheet of paper with LOL Mets on it, because usually the meme in the past was when the Mets sucked, and they did stupid shit, not when a dominating Mets squad did stupid shit and shot themselves in the foot.

But whatever.  Dramatic comeback aside, this is still the Braves we’re talking about.  This might have felt like something that might have happened in old times, but technically the season still is not over.  The Braves have to beat the Marlins once, or the Mets have to lose a game to the Nationals for the race to be officially over, and anyone who’s watched as much baseball as I have has seen it all before, and nothing is over until it is truly over.

And with the Braves in the playoffs, there’s no telling that something that has happened in old times, could very well happen again, with the Braves getting bounced in the first round of the playoffs, and it looks like the Braves will be paired up against the Cardinals, whom usually always has their number in the playoffs, especially with Albert Pujols having a magic final season in his own right.  Or, the Braves make it to the NLCS, where they’ll meet up with Freddie Freeman and the Dodgers, and we’ll have a storyline for the ages, to where Freeman gets the sweetest revenge on the organization who scorned him, and he sends the Braves packing en route to the World Series.

Regardless of what happens in the near future, seeing the Braves have a pretty magical run to (basically) steal the division right out from under the Mets, by sweeping the Mets is something that was pretty noteworthy.  After all, it’s made it into the brog, and I definitely cherish my time and could have been watching the final episodes of The Walking Dead instead of writing, but fucking baseball is time sensitive material, since there’s games every god damn day.