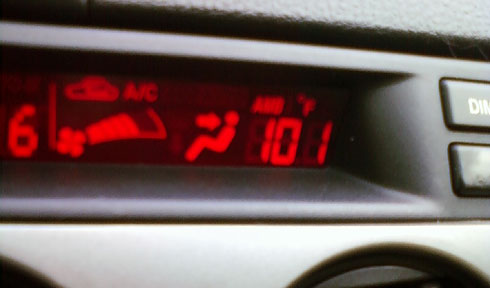 And had I taken this picture 20 seconds sooner, it would have read “103F.”  Seriously, since I moved to Atlanta in 2003, I don’t think there’s ever been a summer this hot before.  And it’s only the end of June, and there is always the possibility that it could feasibly get hotter as the summer progresses.

Seriously, it’s pretty ridiculous how hot, miserable, humid and muggy it’s been the last few weeks.  I hardly want to go outside, and I’m amazed that I’ve still made the effort to trudge out of bed every morning, and jog, while the heat and misery is still a little bearable.  But I’m finding myself being influenced by the weather on all the things that I decide to do with my days.  People, with me as no exception, go crazy when things get too hot.

Despite the fact that the Braves are playing the best baseball since like 2005, I haven’t had the remote desire to go to the ballpark to watch and cheer for them in person.  And in that stretch, the Braves have swept the Royals, and taken two out of three from the powerhouse Tampa Bay Rays, but I haven’t the desire to enjoy the success in person.  Part of it has to do with the heat, but most of it simply has to do with the fact that I’m losing the desire to be a cowboy and go to the games by myself.

The last baseball game I’ve been to in fact, was almost three weeks ago, in Washington D.C., when I was in the company of good friends.  I’ve had the opportunity to catch games in Atlanta, but the thought of going by myself has sort of lost its appeal this season.  A part of it is in due to the want for a girlfriend to go to games with, but mostly, I simply have more fun when I have someone I can chat with while the game is going on.

As part of that smooth segue, I will attest to the reality that I am in fact having a little bit of girl troubles these days, and on top of the heat, it is driving me a little bit intolerably mad.  It’s been quite some time since I’ve been in this kind of situation, and I’m obviously bad with it to begin with, compounded with a whole lot of unknowns that I can only really simply wait upon, and we have a very moody, over-thinking, over-analyzing, cranky Danny.  Waiting sucks, but all other alternatives could only likely lead to disaster.

In other news, the good news bear who needs his fucking honey says that my job really sucks.  As is the case with lots of places I get to freelance at, the people are all okay, and the other freelancers think I’m the funniest person in the world with my bleak outlook on the working world and creative industry, but the reason why I’m brought here, the work, absolutely sucks.

I’ve been used as a glorified proofreader at times, I’ve been used to push papers already, but the worst has got to be right now.  With my contributions, this place caught up, and got ahead – to the tune of two days.  So in order to justify our hours and existence here, us lowly freelancers were tasked with the preemptive strike to start building materials that nobody is sure if they will even be needed.  Try and motivate anyone to go paint a room without the final colors selected, cook fried chicken when it’s not confirmed whether to fry or bake it, or any pro-active action that could very well be for naught in the end – it’s not easy, nor desirable.  And it’s showing with my fellow freelancers, who really don’t want to work on any of this garbage.

Make the problem worse by giving us freelancers no internet access, where we can’t get inspiration, or ideas, and visual references to work with, and now this company has some uncomfortable freelancers.  Most everyone here knows what I’m doing with my netbook, and thankfully nobody seems to care, but I refuse to use my netbook to aide my work, here.  It’s not its job.  If I didn’t bring this netbook, I’d one, lose my sanity, but two, wouldn’t have my tool to aide my work, when my work-assigned machine should be able to in the first place.  I doubt it’s my direct boss that made the decision to nix freelancers from any freedoms, because she’s not shy about having her personal shit up on screen in her own office, but it’s fairly asinine to perform this way, especially when as designers, some visual reference/inspiration/motivation is sometimes necessary.  If not for the rate I’m being paid, I’d request to be hired out somewhere else.  But if this assignment were to spontaneously come to an end, I wouldn’t lose any sleep over it.

The bottom line is that these days, I am a little on the unhappy side, and have unfortunately been turning to the hops and barley far too often to help kill time, drown sorrows, and calm myself.  Not saying I’m on the road to becoming a problematic alcoholic, but I have been drinking a lot of beer lately.  This week alone has seen multiple drinks on Wednesday during trivia, multiple drinks on Thursday from two different bars, tonight could very well see a few nightcaps, and tomorrow, which is something I am looking forward to, some of my best friends and I are invading Baltimore, where inevitably, as it is on our agenda, are likely going to get plenty trashed while this Braves fan sits and watches yet another Nationals game.  But worry not, there will be a designated driver.

I’m looking forward to this weekend after this particular week, but I sure as shit hope it’s not going to be a sweaty, sticky, miserable billion degrees when I’m out in Baltimore tomorrow.