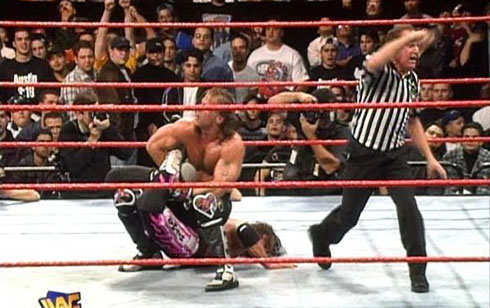 The other day, while trying to undermine Jen’s online streaming Netflix queue, I re-watched Wrestling With Shadows, essentially the Bret Hart/Montreal Screw Job story.  As many people know, wrestling is indeed scripted, and to some degree “fake,” but the story of the Montreal Screw Job was very much real, or it is one of the longest-standing, existing storylines going on 14 years now.

Long story short: then-WWF champion Bret Hart’s contract was up, and WWF Vince McMahon owner felt that he couldn’t match the offer by Ted Turner and WCW (three years, $9 million guaranteed), so it was agreed that Hart would be allowed to WCW with no hard feelings upon expiration of his WWF contract.  So instead of having Bret Hart lose the belt at any time before his departure, Vince McMahon waited to the very last day of Hart’s contract, deviated from the scripted finish of his final match on live pay-per-view with the assistance of several conspirators, and portrayed Bret Hart as submitting to a wrestling hold, thus stripping him of the championship, in his home country of Canada.

As a result, Bret Hart has held a grudge against Vince McMahon, and involved conspirators for the better part of the last decade and change, and only within the last two years has pretended to bury the hatchet in order to financially benefit from DVD collections, appearance fees, and for the sake of his wrestling next-of-kin.

Throughout the span of the last 14 years, Bret Hart has been made to look like the victim, a martyr, in this whole scenario, and that he did absolutely no wrong.  But after reading his excellent autobiography, and now having re-watched Wrestling With Shadows, I don’t agree with such a portrayal anymore.  Maybe it’s because I’m older, more jaded, and possibly a little more understanding of the business standpoint, but the way I see it now, Vince McMahon was right in his iconic post-screw job interview – Bret screwed Bret.

To elaborate on the buildup of the story, basically with the money that Ted Turner was offering Bret Hart to jump to WCW, it couldn’t be ignored.  But in Hart’s head, he felt that he owed it to Vince McMahon to give him the opportunity to attempt to keep him, even if he couldn’t match Turner’s deal monetarily; a loyalty factor, for his first, and longest employer, for whom he made his name and stardom from.  I agree, that’s a noble thought process, sure.

As the story progressed, Vince McMahon made Bret Hart a long-term deal that didn’t quite match Turner’s deal monetarily, which Hart accepted, due to comfort and loyalty.  Due to Turner’s WCW burying the WWF during this time, Vince McMahon eventually had to renege on the contract, citing financially being incapable of being able to honor it any longer.  With McMahon’s blessing, Hart was allowed to pursue the WCW deal, which Turner was more than eager to re-issue.  Accepting the WCW deal, Bret Hart’s WWF career began ticking down.

Bret Hart was still WWF champion, and had a clause in his contract, that he had “reasonable creative control” in his last 30 days of employment – in other words, the WWF wasn’t allowed to bury him and put him in embarrassing squash matches to tank his reputation before pursuing his future endeavors.  However basically, McMahon needed to get the championship belt off of Hart before his contract was up, as to have a 0% chance that Hart could show up on WCW programming with a WWF championship (the last time it happened, it wasn’t pretty), regardless of if Hart’s fierce loyalty would have actually allowed that to happen or not.

Hart more or less had no qualms with how he would have to drop the title, with two exceptions: He would not drop the belt in Montreal, Canada, even if it was the last day of contract, because of the aforementioned character development, as well as a shred of national pride.  And he would not drop the belt to rival wrestler, Shawn Michaels.  Hart and Michaels legitimately did not like each other in “the real world;” Hart was Mr. Straight, doing everything the right way, with integrity, but Michaels was a flamboyant fruit with boatloads of charisma and the ultimate showman; entertaining, he was, but he was also very much an egotistical headcase.  If being WWF champion made Bret Hart the #1 guy in the company, at the time Shawn Michaels was easily #2.  And with Hart on his way out, it only made sense who should be the next champion.

Well, there’s the problem.  Any sort of demands, let alone ego-driven ones, from an employee on their way out, especially one that was defecting to direct competition, are unreasonable.  And to an egomaniac like Vince McMahon, this was like someone was telling him how to do his job.

Like many businesses, no one person should ever expect to be above the company as a whole, and Hart’s demands essentially were doing such.  Wrestling is no exception to that rule.  Maybe it’s happened somewhere in time before 1997, but I honestly can’t think of a single instance where a wrestler got to leave the WWF on his own terms, which Bret Hart was essentially requesting to do.  Somewhere along the line he seemed to think that within his 14 years of employment with the WWF, because he missed a grand total of two shows, and never injured another wrestler, he felt entitled to being able to leave on his own terms. It just doesn’t happen.  Guys who dominated the 80s – Hulk Hogan, Hacksaw Jim Duggan, Big Boss Man, Macho Man Randy Savage, etc, etc.  None of those guys left the WWF with their heads held high.  Two of them were literally killed off by being sat on by a big fat Samoan wrestler named Yokozuna, and others simply faded away into obscurity before re-surfacing in WCW.  That’s the business.

The only instance I can think of off the top of my head of any wrestler retiring from the WWF as an active champion is Trish Stratus.  And as offensive as it may sound, a part of that exception is that she was a female wrestler, in a male dominated industry; along with being insanely popular, a tireless worker, and well respected, and the fact that she was retiring from wrestling completely, and not jumping to the competition.  Trish, is the only instance where a champion got to retire on their own terms.

It almost makes perfect sense that Bret Hart would lose the belt to Shawn Michaels in Montreal, even if it was an elaborate screwing, looking back at it with full knowledge of all the facts.  Looking back at the situation further, it almost makes Bret Hart look a little silly in the long run for simply never being able to let go of the whole situation.  He held a grudge, and let it be known for over a decade.  Vince McMahon is not a stupid man; the businessman in him would work with the murderer of his family, if there was any potential to make profit.  Regardless of history, without question would McMahon have been willing to work with Bret Hart again.

In yet more irony, Bret Hart never got his full $9M from Ted Turner.  He didn’t even complete two full years in WCW before an errant kick by the lummox-like Bill Goldberg gave him a career-ending injury, to which eventually turned into a breach of contract, and his eventual termination from WCW.

Wrestling With Shadows was one thing, but the biggest mistake Bret Hart might have made was just how honest he was in, in his autobiography.  Don’t get me wrong, I appreciate the honesty, but paired with the documentary, it doesn’t do him any justice.  Bret Hart lauded a character that fought for what was right, had honor, loyalty, and integrity.  Unfortunately, that was almost all in his character.  The real man that is Bret Hart repeatedly cheated on his wife, and probably bedded as many women not his spouse, if not more, than Tiger Woods.  Such alone, makes him kind of a swine, and as much as I grew up really loving Bret “The Hitman” Hart, the wrestler, I can’t particular say that I’m really that fond of the persona of Bret Hart, the man, that I had built up in my mind throughout my youth.

It’s kind of sad that my feelings about Bret Hart have turned heel.  I really did enjoy his work as a wrestler growing up, but the hypocrisy I see today, and criticism about his seemingly endless bitterness about a devastating business maneuver it just kind of tragic.  The fact that he wasn’t quite the man that his character portrayed him to be is also sad, because it’s often said that the best characters are people playing themselves, with the volume turned up.  If that were the case, Bret Hart could have been the baddest swine in the history of pro-wrestling.

Instead, Bret Hart essentially let himself become the biggest tool that Vince McMahon wielded in order to turn the WWF around to where they would essentially overthrow, and take back their place on top of the wrestling world, to where they have not looked back since.  Ironically, Hart’s own inability to let go of the situation throughout the last 14 years, while not being an active wrestler gradually made people forget about The Hitman’s legacy as a wrestler, but as quite possible, the most bitter man in the industry.