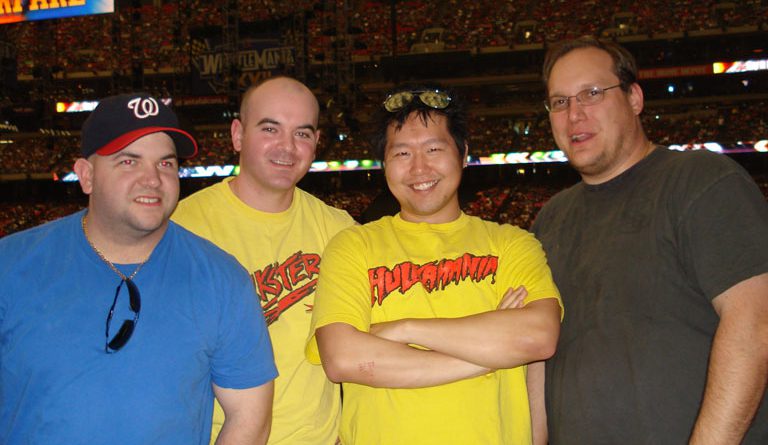 To be perfectly honest, Wrestlemania XXVII was kind of a weak Wrestlemania.  I know that there’s something about being at the live events that actually takes something away from the viewing experience, since you typically don’t have the comfort of a couch or domicile, but are instead crammed into gigantic arenas with tens of thousands of other wrestling fans.  Wrestling fans that are typically 723% larger wrestling fans than I could fathom to be.  And in many cases, wrestling fans that are typically 200% larger in girth than I could ever be.  Regardless, I could tell by what I witnessed that overall, it was a weak show from the viewing standpoint, and no one particular match that I watched stole the show.  But it was hardly about the matches, but simply the fact that it was still a fun experience with some of my closest friends.

For the sake of my own laziness and sanity, I’m not going to go too much into the matches themselves.  The blurry shots that I took are probably only things that I could really interpret and explain if anyone were curious enough to inquire about, but as for the matches themselves, there’s not a whole lot for me to write about.

Due to some circumstances, the scheduled U.S. Title match between Sheamus and Daniel Bryan was bumped off the show entirely, and turned into a dark match (untelevised match used to warm up crowds).  It quickly devolved into a battle royale, which The Great Khali ended up winning, and nobody really cared.

One thing that I’ve always noticed about live events is that there always seems to be people who show up to these things to preach religion.  Whether it was the cWo (Christian Wrestling Organization), or like in this case, people carrying scriptures and bible verses around, I really am curious to know if they think that they have a chance at making people repent at an event where people bashing each other chairs, and scripting violence unto each other.  Regardless, upon seeing their propaganda, I felt that my company I should steer clear from their attempted brainwashing.

One of my favorite internet memes in the entire world is the OWNED guy.  You know, the white couple that has a black baby, and there’s an arrow pointing at the white guy that says “OWNED” on it?  For years, Huzzard and I have enjoyed saying OWNED whenever we have spotted the taboo groupings of a white couple with black/mulatto children, because regardless of whether or not the kids were born within or before wedlock, the fact of the matter is that this guy contributing to raising them, simply means he’s owned.  Much to our amusement, at first it was the bald, Tim Tebow-Broncos jersey wearing toolbag, who just so perfectly had to sit right in front of me, but then the wife and kids showed up, and all Huzzard and I could do at this point was look at each other.  He ended up saying OWNED before I could get it out.

On the topic of toolbags, you’d think that in a crowd of 71,000 people, it might difficult to find the biggest tool in the entire crowd, right?  Wrong.  Apparently, he was sitting two rows up from me the entire night.  John Cena’s demographic consists of: children, girls, retards.  Typically, most grown men are tired of the character, and they’re the ones who take a great deal of pleasure booing him, changing “Cena sucks,” and other loud insults.  So it was quite a revelation when I saw a guy, probably mid-twenties, all by himself, decked out in FULL-ON John Cena gear, which I might add, the red shit and arm bands and head bands were all available starting on this particular day, so it’s obvious that this guy bought all this John Cena shit right then and there, and simply could not wait to put on the concert t-shirt at the concert.  And so we have the biggest tool in the Georgia Dome.

Now I don’t regret going to Wrestlemania one bit, as I did enjoy the time spent with my friends the entire weekend.  But man, did I have two major gripes about the Wrestlemania experience as a whole:

Two Wrestlemanias in the books for me, and I’m glad that some of my friends got to experience it for themselves as well.  But if I can be perfectly honest, I will attest that I have zero aspirations to ever go to another Wrestlemania, let alone WWE public event, ever again really.  As my friend James puts it, he, as well as myself, are a little over wrestling fandom to that degree.  Now I’ll still watch from time to time, and enjoy what’s televised, but I don’t have a lot of incentive to being there again.  Wrestling shows have always been better in the comfort of a house with my friends and good food available.  I get the luxury of comfortable seating, the shows are now typically in HD, we have interesting commentary both from the television, as well as our conversation.  Being live at the event will never compare to that kind of relaxed comfortable atmosphere, ever.

But regardless, it was quite an experience, again, and the best part of it all was simply sharing it with friends.  Otherwise, Wrestlemania XXVII would have overall sucked.