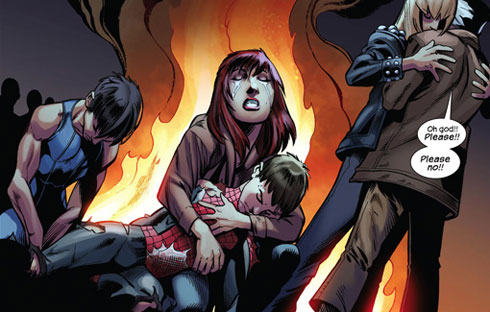 But then I had to go and ruin everything, and find out those silly “details” that clarify everything, and in this instance, kind of remove all the suspense and drama out of the equation.  There is a chance I might slip up my writing and spoil something, so if you genuinely care, don’t continue to read.

I remember back in like 1992 when Superman was killed off, it was a major deal.  News of the death of DC’s iconic superhero burst beyond the hearsay and insider knowledge of comic books geeks, and I recall actual AP articles and stories on the front pages of the New York Times and Washington Post, talking about the Death of Superman.

And then I remember the sensations and experience of actually reading the arc myself, the vivid recollection of where Superman drops Krypton’s greatest axe-handle onto Doomsday as he simultaneously delivers beastliest Kryptonian uppercut, and the ensuing visual of both combatants dying amidst a gigantic pile of rubble.  I remember looking at the final panel, of a wailing Lois Lane, holding the corpse of Superman, and the feeling that the entire world around me was silent, until I closed the comic.

Granted, Superman ended up being resurrected eventually, and business went along as usual, but at the time, this was the first “major” comic event really for me, at the state of comic fandom I was in at the time.   I was never really into Superman, since I was more a fan of Marvel Comics, but I still recognized that the Death of Superman was a monumental event in the history of comics.  Ensuing months seemed odd, and although I can’t say it piqued my interest enough to pursue Justice League, or subsequent issues of Superman, I couldn’t help be feel curious to what was happening in the DC Universe afterward.

Well, I don’t think I can say the same for the death of Spider-Man.  And that’s a shame, because I actually like Spider-Man, a whole lot more than Superman.

The problem is that when I did a little bit of digging for details, I discovered that it’s the death of Ultimate Spider-Man, from the series Ultimate Spider-Man.  To those who aren’t aware, the Ultimate Marvel universe was essentially a refresher with a few tweaks to just about every existing Marvel property, with the main priority to really get the younger generations into iconic characters.  Or as the industry so likes to call them, reboots.

In this regard, it’s not really Spider-Man’s fault, as much as it is Marvel’s, for essentially saturating the market and the storyline with so many alternate universes, arcs, and convoluting canon to where casual readers are utterly confused at what’s canon and supposed to matter, as opposed to what’s not.  The comic industry has grown to a point where there are numerous talented writers, artists, and producers, to where they all have these wonderful ideas and stories to tell.  And they all are producing these things, and suddenly you go into a comic book store, and there are five monthly series, and two new trade paperbacks of new Spider-Man on the shelves.  Good for the business, but continuity armageddon for the characters and properties themselves.

But back to the point, all the blogs, media outlets, and geeks talking about the death of Spider-Man; yeah, saying “Spider-Man is dying!!” is going to generate some buzz, and I’m beginning to think that that’s the actual point of this all in the first place.  That is, aside from setting up more reboots/alternate arcs.  It all feels so cheap and reeking of publicity stunt, then being an event with substantial meaning.  Like the people in charge of Ultimate Spider-Man ran out of ideas on how to keep the storyline going, and when all else failed, they went to their exit strategy prematurely.

But as it pertains to the actual event, it’s really only the death of an inconsequential, counterfeit Spider-Man.  That being said, it essentially negates all credibility and the shock-factor that Spider-Man is actually getting killed off, and will never be as impactful to the world as the death of Superman was.  I’m sure the writing will be good, and it will be emotional, and moving, and evoke sadness to the reader, and mostly those who have been following the series, but to me, it doesn’t really count.  The real Peter Parker/Spider-Man exists solely in The Amazing Spider-Man, which ironically, has also been subjected to a reboot or two already now, but he’s still alive and well.