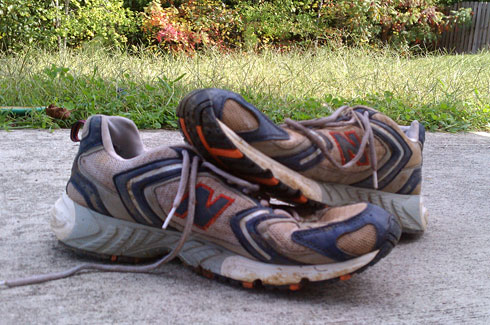 With the completion of the muddy and miserable-conditioned zombie run, it’s time I retire these shoes once and for all.  They are without question the best pair of athletic shoes I’ve ever owned, and to say that I’ve gotten my worth out of them is a complete understatement.

Believe it or not, but I’ve had them since 2007.  Now I know that most people who exercise on a fairly regular basis would chide such absurdity as keeping one pair of shoes for so long as I’ve done, but frankly, I’ve never seen the necessity in replacing them.  Either I have tough-like-an-African feet, or I simply got used to and coped with the deterioration of the soles, padding and tread throughout the last five years…

Five years.  Huh.  It’s funny typing that out, considering some runners don’t even make it five months with the same pair of shoes.  I remember where I got these too; at a DSW Shoe Warehouse in Dunwoody, because I needed something to do before a party in the evening, and I didn’t want to go back home prior.

In five years, these shoes have seen the following “organized” runs:

In terms of organized runs, these shoes have carried me through 42.1 miles of asphalt, hills, grass, mud, smashed cups, discarded donut boxes, rain, snowflakes, heat and cold.  Off the record are countless, countless miles of laps around my own neighborhood, laps around the lake near my parents’ house, and on the treadmill.

I can easily say that these shoes have carried me through hundreds of miles in the last five years.  There is even a chance that I may have hit the 1,000 mile mark with these shoes, seriously.  There was a stretch between 2007 and 2009 that I didn’t miss a single week with at least one trip to the gym, and between 2007 and 2009 whenever I did go to the gym, it always entailed at least three miles on a treadmill.

Regardless, I know it’s silly to churn out hundreds of words for the sake of a pair of shoes, but I have a hard time dealing with change and moving on sometimes, and saying goodbye to these shoes marks one of those instances.  I could very well clean them off and continue using them, but at this point, I’ve got a convenient chance to start anew with a fresh pair of shoes; they’re caked with mud, and already halfway down into the shoe grave, so I may as well bite the bullet and let it lie, and move on.

Hopefully for hundreds of more miles.