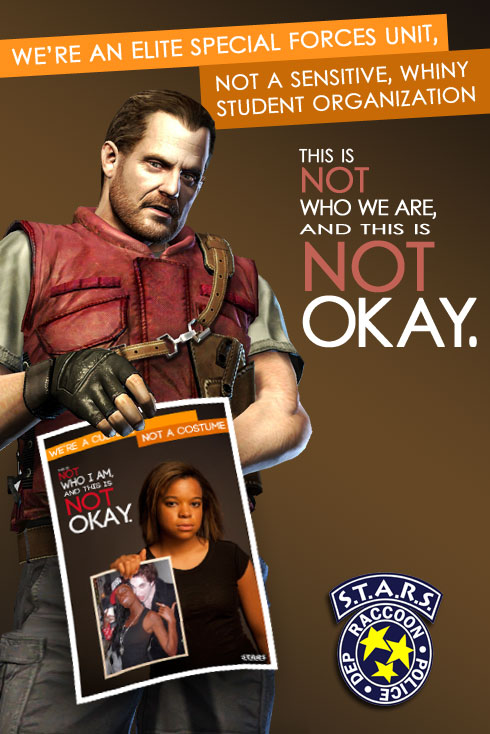 Probably contradictory to something I’ve said in the past, but Halloween costumes don’t offend me.  If a non-Asian person dresses up as something making a mockery of Asian people, fine, I might very well be inclined to counter with something that mocks their culture back in the future.  But I’m not offended by it.

A bunch of students at Ohio University has apparently take it upon themselves to attempt to take the fun out of a chunk of Halloween with these buzzkill PSA posters about how select tasteless Halloween costumes are racist and how it IS NOT OKAY.  That’s fine, I can see that they’re frustrated, and are pretending to have no funny bone to spread an agenda, and are probably hypocritically standing against culturally-mocking Halloween costumes.  If that’s their prerogative, I can accept that.

However, I cannot accept the fact that they’ve given their little student group a name, but not just a name, but an acronym, that stands very dear to my very heart: S.T.A.R.S.

The original acronym of S.T.A.R.S. is Special Tactics And Rescue Squad, and it is the group that contained Resident Evil mainstays Chris, Jill, Barry, Rebecca and Wesker (Brad, Forrest, Enrico, Richard, Joseph and Kenneth too).  This whiny group of transparent, overly-sensitive college students trying to make themselves look good are calling themselves “Students Teaching About Racism in Society (note the unacknowledged ‘in’),” but are helping themselves to the S.T.A.R.S. acronym, which I find to be unacceptable.

It’s not even a good acronym with the missing “i” in it.  Call themselves “S.T.A.R.i.S” or something, but not fucking S.T.A.R.S.  So with such a treachery, drew my ire, and forced my hand.  There are some truly awesome mockeries out there (also in the provided link), but they left out addressing the biggest encroachment of them all.  But it wouldn’t have been appropriate if it were done by anyone other than me, so here we stand.

Using Barry Burton is like the perfect juxtaposition, since he’s pretty much the toughest, manliest character in the Resident Evil universe, but them to have him emo-bitching about the not really that offensive matters of being masqueraded by a bunch of sissy college students who can’t find a good laugh in tasteless humor, seemed very appropriate to me.