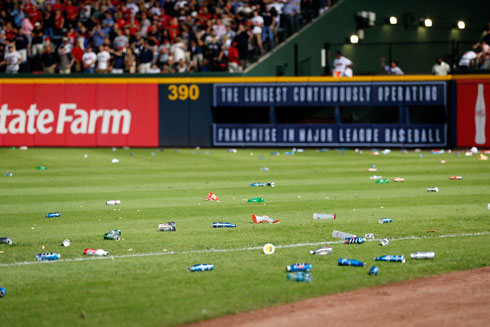 The Atlanta Braves have been knocked out of the playoffs twelve times since 1995. The fact that they made it to the playoffs in twelve of the last seventeen years is impressive in its own right, but still, zero championships in that span.  Needless to say, seeing the Braves get bounced from the playoffs is truly nothing new or out of the ordinary for a Braves fan.  At least until the events of the 2012 season came along.

This was truly, the worst defeat I’ve ever seen in my entire, baseball-watching life.

To those of my three regular readers that might be tiring of how much I’ve been writing about baseball lately, you’re in luck.  Frankly, after this, I don’t really feel like writing about any more baseball, on my personal site, for a long while.

The Braves lost the game because they made a boatload of errors and couldn’t get the big hit when they really needed it.  But those weren’t the only reasons.  In spite of the Braves beating themselves, they made numerous threats to catch back up and possibly take control of the game, but all it really took was one, really, really bad call by an umpire, for absolutely everything to come crashing down.

To those who didn’t actually see what happened, this was no ordinary blown call by an umpire where a guy was tagged, but it wasn’t seen, or a phantom catch, or a bad call at first base.  This was an umpire making a call on something that happened way later than it should have been called, and it ended up costing the Braves greatly.  The infield-fly rule is an inauspicious rule to begin with, but no matter how much fancy vernacular they utilize to describe it, it’s still subjective to the eye of the beholding umpire.

An umpire called for an infield-fly that wasn’t really an infield-fly, but since umpires are never wrong and can’t possibly say “my bad, I was wrong,” the Braves were penalized with an out and the bases not being full, as opposed to having the bases loaded with but just one out.  At this point when the fans realized that the Braves were being punished for safely hitting a baseball, all hell broke loose.

And quite literally, because this devolved into one of those worst-of-humanity scenarios, and people began pelting trash onto the field in protest of such obvious bullshit.  The game was delayed for a significant amount of time, but it’s not like it was unwarranted.  The fans had every right to be pissed at the situation; maybe trash throwing is to the extreme, but given the magnitude of the situation and the levity of the insta-death playoff setting, they clearly felt they had nothing else to lose.

There’s no saying that the Braves would have successfully made a comeback had the phantom infield-fly not been called.  But it’s something that nobody would ever know, because it wasn’t ever given the chance to play out as it should have.

In the end, the Braves certainly lost.  Even though they dug their own grave with their own sloppy play and inability to get the big hit, but the most crucial of situations was completely denied by bad officiating, and never got to take place.  This is a completely tainted victory for the St. Louis Cardinals, and although I hold no ill-will to their team or their fans, I feel completely justified in saying that whatever they do in the remainder of their playoffs as well as everyone who encounters them, should be aware that their inclusion in the postseason is tainted and as far as I’m concerned, worthy of the denigrating asterisk.

There’s a lot going on in my head in regards to this whole situation.

I really want to say that I won’t watch any more baseball for the remainder of this calendar year.  I probably wouldn’t be able to withhold that promise, because a part of me wants to see my Nationals-loving friends happy, and if not them, then sports-warming story of the Oakland Athletics.  And who knows if I don’t tune into some South American winter-league baseball while on XBOX Live.

But the fact of the matter is that I’m livid with baseball at the moment, and for really the first time ever, just simply mad at the sport.  I’m over baseball right now, and frankly, want nothing to do with it, even if it means tuning out and not watching anymore of these fucking tainted playoffs.