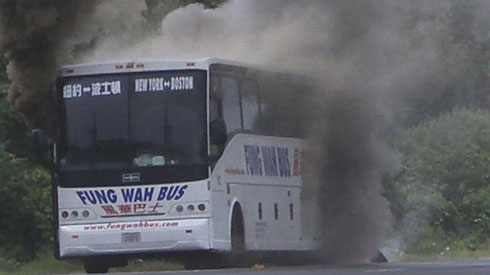 Yeah, I know I dog on the Chinese a lot, but to some degree I can’t help it because I’m Korean, and all us Chinks rag on each other all the time.  Not that it’s really anything that’s really acceptable in the first place, so let’s chalk this up on animosity towards the Taiwanese baseball team for trying to cheat by illegally scouting the Korean team.  All the same.  Now it’s war, motherfuckers.

Anyway, there was recently a story about how the Fung Wah bus company, which provides dirt cheap bus service between the New York City and Boston Chinatowns, facing scrutiny under allegations that 75% of their buses are under code and fail all sorts of safety standards.  Cracked frames, busted steering columns, not to mention Chinese drivers who don’t speak a lick of English, and probably are illegals to begin with, but apparently it’s just now that Fung Wah is facing some scrunity, after almost a decade of debacles.

Now to their credit, Fung Wah did contribute a lot in providing dirt cheap transport between New York and Boston, which has forced competitors to drive down their own costs, but it’s mostly because the Fung Wah company is using outdated buses that they maintain only enough to start the engine and not much else, and leave absolutely everything else to chance, including the safety of passengers.  For $15 bucks to get to New York from Boston, you’re essentially putting your safety in jeopardy at the cost of a cheap fare.

The most amusing part about all of this is the fact that there are people that are legitimately surprised by Fung Wah’s lack of regard for maintenance, standards and safety.  Chinese people who have no regard for those silly things called “laws?”  Not possible, couldn’t be.  It’s not like there isn’t chronicled documentation of Fung Wah buses crashing on highways, injuring numerous people, and spontaneously combusting on roads or anything that would get them scrutiny from safety inspectors.

Fung Wah’s bus safety is completely based on smoke and mirrors, and it’s more surprising that it’s taken this long for them to be put under fire.  I mean, after over 150 maintenance violations in just the past two years from just 28 buses, you’d think that someone would do something about it, but I guess someone had to die before that something actually happened.

The scary thing is that anyone who thinks that this is going to slow Fung Wah down, has got to be delusional.  Despite the fact that Fung Wah has been ordered to remove and get 21 of their 28 buses up back up to code, as long as the repairs are the responsibility of the Chinese folks, you know correct protocol isn’t going to be done in favor of the most cost-efficient and bare minimum.

The cracks in the bus frames, steering columns and engine mounts will be filled with Mighty Putty, or its cheap Chinese knock-off equivalent, and then spray painted gray, or rust, to match the rest of the bus hardware.  They’ll be given a nice car wash on the outside, Febreezed on the inside, and have fake empty fire extinguishers installed near the driver’s seat.

But there’s a good chance that by the time I actually get around to posting this, the entire Fung Wah death bus fleet will be back on the road, risking human lives one bus load at a time.  But hey, it’s just $15.