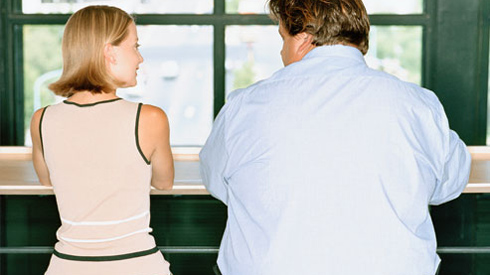 I was at breakfast, and while waiting to pay my bill, I noticed a family walk in the door; it looked pretty clear that it was a couple coming in to have breakfast with their dad.  Watching them walk in, dad looked like your typical crotchety old white male, with a scowl on his face, and generally looking miserable with his life.  As for the couple, the wife appeared to be late-thirties, possibly early-forties, but still attractive, but as far as the husband was concerned, I couldn’t look beyond the massive beer belly that was protruding bulbously from his torso.

The next thought that ran through my head was simply, “how much does it suck to be her, that her husband turned into such a fat guy?”

Of course, there are a lot of assumptions that are going into the equation here, that perhaps he’s always been a fat guy, and that she might be partially blind or grossly far-sighted to where she might not have noticed, or maybe she really isn’t that superficial and genuinely loves the guy no matter what his physical appearance is.  Regardless, it got the train of thought leaving the station with the belief that he wasn’t always fat, wooed his lady, married her, and whether it was laziness, apathy, a medical condition or all of the above, became a fat beast.

And I think that that’s kind of a dick move to do to your wife.  I’d also think it would be a dick move of a wife to do to her husband, but that’s a different scenario with a few irrefutable variables that cannot pertain to men, so we’re just going to stick with men that become fat fucks much to the chagrin of their spouses.

But really, I think it’s a dick move for a guy to do to his wife.  I get that maybe not everyone’s completely superficial and isn’t incapable of getting around aesthetic shortcomings, but I also don’t think there’s such a thing as a perfect person.  Most often times, I think the shortcomings in people are often a disagreement of personal preferences, so that being said, I think that everyone’s capable of disliking something for no other reason than that they don’t find it visually appealing.

In the case of this woman, she’s clearly held up pretty well through the years; I know that I’d feel good about myself if I passed her in a public place, and she gave me a smile.  But I feel bad for her that her husband is this gargantuan mountain of a man, because I have to imagine that at some point in their relationship, he probably wasn’t.  He might have been a handsome man of average-to-impressive stature at some point, and was able to attract her eye, a young woman eventually looking for Mr. Right.  But then they got married, and due to some unfortunate circumstances, he began to not just gain weight, but balloon.  The mental precautionary warnings were either ignored or never went off in his head, and eventually third helpings, just one more when one more should have been three fewer ago, and too many lazy evenings where McDonald’s, Wendy’s or Zaxby’s seemed like the easier route to go really caught up to him.

For all I know, she could very well be happy, and completely ambivalent to the husband that isn’t just larger than her for no other reason than gender, but close to thrice her size.  But from an outsider’s perspective, I feel bad for her.

Because as a guy that one day wants to have a loving woman in his life, I’d like to think that I wouldn’t have it in me, to dramatically transform myself in such a negatively perceived way, after locking that shit down.  Men often claim that their destined women make them want to improve themselves, yet there are so many cases of people getting married where the man, woman, or in disastrous situations, both, go in the opposite direction.  How is becoming obese demonstrating claims to want to improve?

Obviously, I have to disclose that I’m aware that I’m technically overweight in my own right, and that I’m certainly probably no prize to the girls in my life that I’d aspire to hope to get a shot with, but I can assure anyone that if miracles to occur, and I’m able to snare and lock down a woman, that I legitimately would feel bad and want to really aspire to correct things, if I began to head down the path of physical complacency and began ballooning in a dramatic manner.  Seriously, becoming morbidly obese after getting on the ring on that finger is a dick move, and as someone who aspires to be a consummate southern-born and bred gentleman, I’d like to avoid doing dick moves.