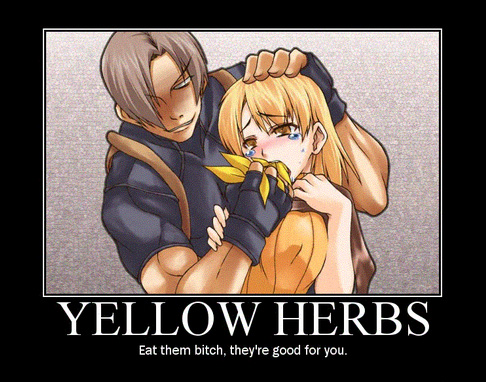 I’m not entirely sure what brought on this train of thought, but I was thinking about the Resident Evil series.  Namely the fact that aside from first aid sprays being a way of replenishing health, there are medicinal herbs scattered throughout the fast locations throughout the series.

Seriously, if you apply the growth of herbs to the real world, then herbs are pretty much the most versatile plants on the planet, as they’re able to grow/exist in not just Raccoon City, but as well as in the Spanish countryside, Chinese ghettos, African shantytowns, war-torn Eastern Europe, as well as extreme climates such as Antarctica and an active volcano.  Oh, and pretty much 2,000 leagues under the sea as well.

But this post isn’t to discuss the absurdity in how unbelievably resilient herbs are, it’s really about how there’s absolutely no consistency in which the herbs are used throughout the Resident Evil series.  In later games like 5 and 6, there are actual character motions that show how they’re used, but they’re completely different from one another.  In earlier games in the series, herbs are used in the menu screen, and therefore it’s left completely ambiguous to how they’re actually applied.

Regardless, I find it silly, and a little bit absurd that the series, despite it being entirely continuous by the same creators (for the most part), could never really nail down one consistent method of how to apply such an iconic and trademark concept such as medicinal herbs.

Quick crash course in RE Herbology:

Herbs in the earliest iterations of the series were left to the player’s imagination to how they were used, as they were only usable while within the ambiguous confines of the inventory menu.  When you find a green herb or a blue herb individually, they appear in the inventory as the physical plants.  If used in this state, how is it used?  Are Jill, Chris, Leon, Claire, Rebecca, Billy, Carlos and Ada eating them?

Imagine that, taking a few seconds out of shooting zombies or flamethrowing hunters or bazookaing lickers to cram a plant into their mouth.  Like straight raw, they don’t even get a chance to wash them or anything.  I guess when you’re injured or poisoned, and want that relief immediately you don’t have much choice, but still, wolfing down herbs doesn’t sound like the most delectable thing to be consuming regardless of the circumstances.

But when you combined herbs, it becomes way more vague.  Combining any two compatible herbs visually results in a nondescript piece of brown paper with the colors of the combined herbs overlapping each other now in some sort of liquid or powdered form.  A full green/blue/red combination for some reason turns brown, for that matter.  Regardless, this creates an even more ambiguous form that leaves the player clueless to how it’s applied.

Is it eaten?  Do Jill and Rebecca fold the sheet of paper like a taco shell and bottoms up it, like the remaining crumbs out of a bag of potato chips?  The fact that it’s a pile of matter on a sheet of paper have also led to a decade of jokes from people, claiming that they have to be rolled up into a joint and smoked for their medicinal purposes.  Ironically, I don’t think that’s necessarily an invalid hypothesis either.

But we would never know in the initial generation of the RE series how herbs were used.

Resident Evil 4 is clearly revered as the game that reinvented the series, as the game was redesigned to no longer utilize tank controls and locked camera angles.  In terms of herbs, it was also the game where blue herbs were dropped, along with the notion of poisonous enemies.  However, RE4 was the only game to have yellow herbs, which increased the maximum health capacity of the user, whether it’s Leon, Ashley or Ada.

Finding a green herb on its own still appeared in the attaché case as a physical plant; like in all of the preceding RE games, use of the item was solely done in either the inventory menu, or if the inventory was completely full, it was possible to use them upon picking up; either way, there’s no visual representation in how they’re actually used.

Mixing any two herbs however, appeared in the inventory as a three-segmented beaker, with each segment containing the color of whatever is in the mixture.  The beakers can then be used with two herbs, or can have a third one added prior to use.  But again, it’s completely ambiguous to how they’re  used, but at least the lack of a pile of powder or goo on rolling paper eliminates the age old joke that they’re being smoked for health purposes.

RE5 was the first game in the series to depict how herbs were actually applied: as a spray.  It didn’t matter if you were using a singular green herb, or a red/green mixture, everything was immediately converted to a beaker visually, and when used, the player would spray it on themselves, and if your partner were close enough, they too would enjoy the healing benefits.

After all the prior RE games, after all these years, we finally had answer to how herbs are actually applied.

Despite the fact that RE5 had finally established a manner in how herbs were actually used, for whatever reason, RE6 decided that they weren’t going to adhere to establishment and just go off in their own direction for really no discernible reason.  I guess there is some logic behind it, but at the same time, it’s not like the game would have been any easier if were kept in the same vein as RE5’s spray.

But anyway, in RE6, the use of herbs was transformed into herb pills, or as I liked to call them, herb mints; because whenever you had to use one, it looked like your character would whip out an Altoids tin and pop one into their mouth while trying to be discreet about it.  A singular green herb would be instantly converted to three herb mints, each of which would restore approximately one block of health.  Mixing a green and a red herb would result in double the number of mints, giving you more health to restore over time.

My guess to why this was the case was that simply spamming one green herb between two characters might have seemed a little challenge-reducing in the overall span of RE5.  RE6 was notoriously more difficult than its predecessor was, and the fact that herbs in general were pretty weak in terms of regenerating health, since you had to spam the herb button repeatedly while evading an attack in order to get a substantial amount of health back, I think they accomplished their goal of nerfing herbs.

But still, they could have just kept it as a spray, but made sure that it only affected whomever was actually using it, regardless of proximity.

Nope, because nobody tells Capcom what to do, regardless of logic.

I wonder what’s going to be next, if there is actually going to be another RE game in the series?  With the original creator gone, as well as Capcom’s publicly noted financial woes, who knows if there will actually be one in the future, but it’ll be interesting how herbs are utilized if there is.  Maybe syringes next?  Or maybe it will be like Secret of Mana, where regenerative candy is depicted as nothing but a drop of water falling on your head.