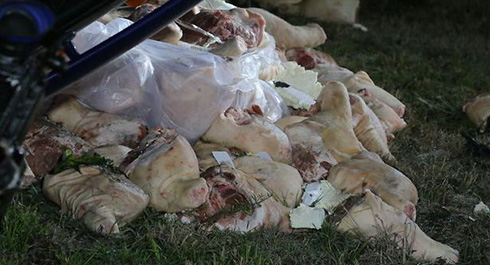 A long time ago, I worked with a guy who spoke with a pretty thick Cambodian accent.  One cold winter night as he came inside, he exclaimed to me and the other people present, to “be careful outside, there’s black ice everywhere.”  The thing was though, due to his accent, “black ice” sounded precariously like “black guys.”  This elicited a lot of laughter from us (it’s okayone of the guys present was black!): Watch out for all the black guys outside.  The black guys is dangerous.  Black guys everywhere!

Anyway, over the span of the last month, there has been a rash of trucks overturning on highway ramps, spilling their contents all over the place.  Now there’s no confirmation that black guys ice has had anything to do with any of them, but given the fact that it’s the winter, we here in Atlanta have been subject to some record-breaking arctic polar snaps, there’s always the possibility that black guys might have been involved.

Confirmed or not, it really was a convenient excuse for me to forcibly shoe-horn in the black guys story because I’m a terrible person and I find it amusing.

Regardless, black guys or no black guys, it’s still somewhat amusing the nature of these truck crashes; now thankfully no people were seriously injured in any of these wrecks, so it’s okay to make light of them, at least as far as I see it.  The first wreck, right before Christmas was literal tons of holiday hams spilling out of an overturned semi (seen above).  Just a little over a week ago was then the truck that dumped tons of chickens all over the road, when it overturned.  And then just recently, yet another truck overturned almost at the same spot where the chicken truck overturned, but this one was full of, beer.

The frequency in which these crashes have occurred makes my imagination go a little wild, and think about the plot of the original The Fast and the Furious (RIP, PAUL WALKER) where Vin Diesel’s posse makes bank by hijacking semis and selling their contents on the black market.  I like to imagine a posse of gaudy cars speeding down I-285 in the middle of the night, trying to hijack semis full of consumable products; I mean it wouldn’t be the first time people tried to steal food in this city, so why not?  But instead of slickly and deftly hijacking the trucks and escaping cleanly into the night, the robbers are instead foolishly choosing highway intersections and twisty and wide-turning ramps to execute their heists and failing miserably, resulting in trucks overturning, and everyone losing with food spilled and ruined all over the place.

So we got hams, chickens and beer all over the place now.  We just need a Publix truck to crash on Spaghetti Junction or something, and flip some side dishes and maybe some picnic cutlery and plates onto the road, and then we’ve got the supplies necessary for a pretty decent party.