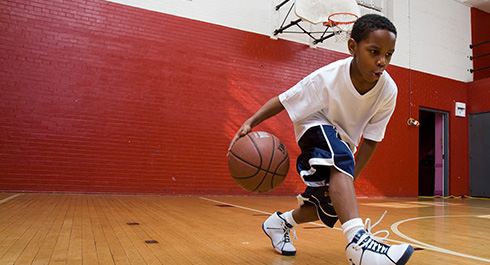 I don’t watch a whole lot of ESPN, despite the fact that I fancy myself someone interested in sports, because I think ESPN is basically for the most part utter garbage. But when I’m at the gym, and I’m running on the treadmill, I like to have distractions; I have music playing through my iPhone, but occasionally it helps to have some visual distraction as well. And since all the treadmills come equipped with personal televisions, it’s fairly convenient to seek something to watch to help pass the minutes.

Unfortunately, the gym’s television programming is limited to like nine channels, and at any given time, four of them are Wendy Williams, two are the Kardashian show, the others are chintzy intolerable mid-morning talk programming, and then there’s ESPN. If I’m really lucky, it’ll be a day in which the E! network decides to air old episodes of Saved by the Bell, but for the most part, I end up having ESPN on, because Hannah Storm or Jade McCarthy are easy on the eyes, but then I turn the television off when Stephen A. Smith shows up.

Long story short, I admit that I watch a little bit of ESPN. And in that little bit of ESPN, I’ve noticed something that a lot of other people have probably already noticed long before I did, but whatever, I’m writing about it now.

But apparently in the ranks of college sports that matter, i.e. football and basketball, the greatest things in the world are freshmen. Last year was Johnny Manziel. This year was Jameis Winston. And when the college basketball season started up, ESPN couldn’t wipe the drool from their lips fast enough to blow guys like Jabari Parker, Andrew Wiggins, and whatever other freshly recruited freshmen were already starting for major D-I programs.

This is all fine and fair overall, because extraordinary talent should be playing at appropriate levels, even if it means starting, because a team’s best chance at winning involves playing the right players as much as they can. But it’s getting to a point where hype trains are being created for guys who haven’t even hit age 20, and people like me are beginning to find it kind of odd in a way.

I get that when it comes to competitive organized sport, people see young age as a big asset because of the assumption that as these young men mature both physically and mentally, they can only become better, and there’s no more efficient way to stretch that growth and development than getting them while they’re young. But the world of college sports are becoming obsessed with freshmen, and it’s just so weird to me.

Freshmen are the class of students that are to be ridiculed, mocked and hazed (appropriately and within reason), because it is the age-old tradition of breaking in the young and naïve to educational institutions. High school, and in college alike. Pay their dues, learn the ropes, become toughened up, climb the food chain. Clichés like that, but it’s also not without reason.Overcoming adversity, regardless of how petty or seemingly inconsequential it is, only makes people stronger in the end.

Colleges going so over-the-top with exalting these young and inexperienced 18-19 year olds for absolutely no other reason than that they’re good at a particular sport can’t possibly be a good thing, for anyone. Now, I’ve often times been the guy defending college sports whenever there’s an occasional sports vs. academia argument on the topic of college budgetary allocations, but in a case like this, there is not one iota of me that agrees with the over-spoiling of freshmen athletes.

In this regard, I will never understand and agree with sports, because when the day is over, colleges and the prospective pro teams that want all these athletes are completely missing the point of society, and are placing superficial athletic wins and the financial reward that tends to associate with such achievements at a vastly higher priority than the growth and development of outstanding, educated, productive-to-humanity citizens.

The scary thing is, at what point will the obsession of getting younger end? It’s no secret that in spite of NCAA rules and regulations, student athletes are privy to all sorts of benefits, whether or not it’s resulting in actual currency in their pockets.Agents chirping in their ears, or the ears of their parents who relay the chirps to their kids, who do the bidding of those who are trying to groom them into potential big money makers in the professional ranks.

Who’s to say that (if it’s not already the case), agents aren’t already scouting and getting in the ears of 16 and 17 year old football and basketball players, and trying to steer them into the fastest path to the pros? Convince a high school junior to pursue his GED so he can get into a junior college or a D-I school outright if there’s no age restrictions, so he could start his college career, get redshirted once or twice so that could set the world on fire when they play their “true” freshman year, and then go pro immediately afterward.

The scenario above is pretty much what the Washington Nationals’ Bryce Harper did, actually. He got his GED, ditched high school, got into a junior college that specifically had a team that played with wood bats to show that he was ready, and was drafted, blazed through the minor leagues, and is a starter for the big club now. But he’s also a devout Mormon with a very functional team of family, marketers and other support to make sure he continues to make money.

There’s no guarantee that every overhyped freshman athlete is going to have such contingency plans in place for their professional careers.

Take Jameis Winston for example; say he decided that since he won the National Championship and the Heisman Trophy in his freshman year, he had nothing left to prove in his collegiate career, and decided to go pro. He would be 20 years old going into the draft, and regardless of if he would start for an NFL team or not, he would still make a pretty penny in some sort of signing bonus.

He makes a dumb mistake of hooking up with a woman and ends up getting Hepatitis B or something that pretty much prematurely ends his career. Because he was coddled and worshipped, and probably had his grades fixed so much in his one year of college, it turns out that he has learned absolutely no life skills in the process. No longer being physically capable of playing sports, which means he is no longer physically capable of earning money, the agents and scouts that essentially bred him to the professional ranks no longer care about him, and no longer give him the time of day. Frankly, no longer eligible to play for FSU after going pro, FSU doesn’t want him back to learn on their dime.

After blowing through the rest of his signing bonus because he never learned how to manage his money or didn’t bother associating with some sort of financial expert, Jameis Winston is penniless and uneducated and unemployed. He isn’t even 22.

The thing is, we see and hear stories about a litany of long retired professional athletes who have ended up the same way, but the difference is that all of them have at least had the opportunity to make it to 35 before becoming total fuck ups. Obviously the example with Winston I used is a pretty extreme hypothetical, but it’s not to say that it’s not impossible either, and someone could completely ruin their lives by the time they’re barely allowed to drink. The NBA and NFL have some degrees of age limits, but that doesn’t seem to stop anyone from trying to cultivate the next stars at earlier and earlier levels.

Man, this post went in a completely different direction than I had intended to go with it. I was really thinking that it was going to go more low-brow and attempts for humor, like about how gross it would be that hot, 22-year old senior college girls would be lustily chasing after 18-year old freshmen, because they’re supposedly the next generation of professional athletes, and they want to get their feet in the door really early. And how back in the day, it was supposed to be the other way around, regardless of if the freshmen were athletes or not, because freshmen are scum and have to earn their way into the pants of senior girls.

Also, how much it must really suck to be upperclassmen athletes in college now, because apparently the perception has turned into that if you’re still in college, it clearly means that you’re not talented enough to go pro, and that it’s absolutely impossible that you’re considering the importance of having that education and college degree before moving onto the next phases of your life. It’s like being a junior or senior athlete really sucks, unless you’re more of a role-player type, like a lineman or a low-scoring/high-rebounding forward or center, because quarterbacks and point guards are supposed to be flashy and coddled freshmen now.

But seriously, the sports world’s obsession with freshmen and getting younger and younger is definitely not a good thing. It may be astonishing to see immense physical and athletic talent at young ages, but when the day is over, if they don’t grow up to be decent human beings, than everyone around them has failed regardless.