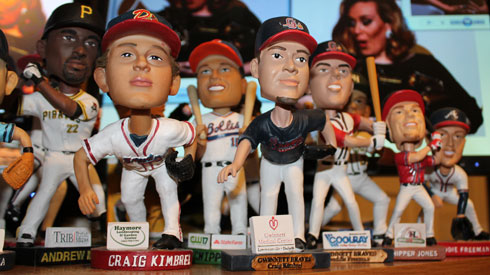 Ugh, I can’t believe I just used a hashtag as my title line, but frankly it is pretty succinct in this particular application.

Anyway, I’ve made no secret that I’m a pretty terrible baseball fan these days, and as the 2014 season approaches closer and closer, I should be getting more excited than I am, because when the day is over, I still really do like baseball.  It’s just that it’s not as all-consuming to me as it once was, and I kind of view baseball as the ultimate and greatest fallback activity there is, and when it comes to travel, no travel seems necessarily complete without having viewed some baseball in some capacity.

One thing that has remained consistent throughout the years though, is my craze for baseball bobbleheads.  I really still can’t explain it, but I really do enjoy collecting them, and the accumulation of more bobbleheads is something that I’m pretty passionate about as the seasons come and go.  More than the release of schedules of games and opponents, I’m more excited about the release of the schedules of promotions, with hopes that I’ll see bobbleheads listed among them.  Not just at home in Atlanta, I have my eyes peeled, and ears to the ground when it comes to bobbleheads all throughout Major League Baseball as well as, throughout the minor leagues.  Especially those that are Braves affiliates.

Hunting down bobbleheads is as good of an excuse to travel as much as the goal of visiting every MLB ballpark.  If I can hit up a new ballpark and get a bobblehead in the process, it’s like a super bonus.  I’ve actually marked two dates on a tentative calendar of places to hit up for such super bonuses.  But there’s no sugar-coating it, such a craze is somewhat reckless, and sure as heck ain’t free.  Granted, it’s nowhere nearly as costly as accumulating replica wrestling championship belts, but it’s certainly harder when there’s travel and the concern of things like getting to the parks on time, bad weather, and other variables that can mess things up.

In this particular case, the impetus for me deciding to write (aside from it being slow as balls), is a conflict that I’ve discovered that has me stumped.  I have a little bit of anxiety about it, although I’d like to believe there are very possible solutions to it, but it’s the fact that I don’t have them instantaneously that has me concerned.  And in the grand perspective of things, it’s really trite since it involves nothing but bobbleheads, but god damn it, I want all of the bobbleheads.

July 18th.  When the Richmond Flying Squirrels announced their promotional schedule, I was ecstatic to see that they would be giving out a Chipper Jones bobblehead on that date.  Despite the fact that they’re a Giants affiliate, there’s logic to it, because Chipper Jones once played in Richmond, back when they were the Richmond Braves.  There is no doubt that this bobblehead will be that of Chipper Jones in a Richmond Braves uniform, which looks just like a regular Atlanta Braves uniform, except for the fact that the cap will have an “R” instead of an “A.”  This was a no-brainer of a trip to make, since I have family and friends in Richmond, and it would be a perfect excuse to visit them, as well as get this desirable bobblehead.

July 18th.  This week, the Lynchburg Hillcats, the High-A affiliates of the Braves announced their promotional schedule.  Now the Braves organization as a whole, are giving out a ton of bobbleheads this season, and I’ve gotten them all marked down on a calendar.  They’ve done an admirable job between five different levels of the system of not having any days where they conflict, creating an almost perfect schedule for me to have a chance to get my hands on every single one of them.  But Richmond, no longer an actual affiliate of the organization, probably was overlooked in this scheduling, in spite of the fact that they’ll be giving away a bobblehead of the Braves’ latest sure-fire Hall of Famer.  Long story short, on July 18th, the Lynchburg Hillcats will be giving away a bobblehead of their own, one of Evan Gattis, a player that I do like, and would want, especially since it’s one in the gaudy green and yellow Lynchburg Hillcats attire.

So basically, I’m in the position where I want both bobbleheads, but can only physically acquire one.  Obviously, I can’t be at two places at the same time, otherwise this isn’t an issue.

This, is the kind of conundrum that gives me the anxiety of the silliest variety.  Fuckin’ bobbleheads.