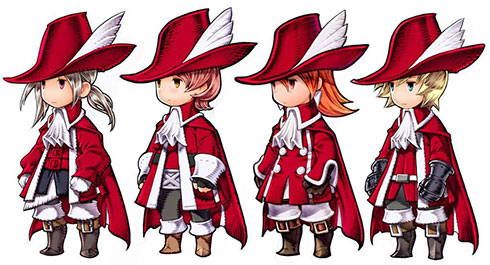 The red mage reference in question here is that of Final Fantasy lore.  The class of character that was the definition of a jack of all trades; they could fight with weapons and equip actual armor yet they were capable of casting white and black magic.  Not to mention that in most every instance of the appearance of the red mage, they had an awesome red hat, often times with a feather in it.

Sounds appealing, being able to do a little bit of everything, doesn’t it?

The drawback to the red mage was however, is the fact that they were a jack of all trades – meaning that they were neither a king nor a queen of any of them.  Their fighting prowess had a ceiling far lower than that of any other class that specialized in fighting strength and abilities, and their speed and agility were vastly middle of the pack, and could go no higher.  When it came to casting spells, sure, they were capable of casting both white and black magic, but they eventually hit a wall with both, that they are incapable of surpassing, while white and black mages can continue on to learn a litany of spells exclusive to just them.

In other words, red mages are pretty awesome in concept, but in order to truly be great in any capacity, it is impossible with them.  Only the fighter can equip Excalibur, only the thief can be the fastest, only the white mage can learn Revive, and only the black mage can learn Nuke.  Even at level 99, will you not hit has hard, move as fast, heal as much or cast damage as any other class with a more exclusive skill set.

I still think red mages are awesome, but the fact of the matter is that they’re kind of the perfect analogy for people like me: people who have a diverse array of interests and hobbies, but when the day is over, not truly excelling at any one of them.

A jack of all trades, and a master of none.

Personally, I adore the idea of versatility.  Whether it’s been in video games, in sports, and even in artistic pursuits, I’ve often times been drawn to the idea of people who are capable of doing lots of things.  It just seems awesome for there to be people that do a variety of things, instead of one solitary discipline.

But the more I think about it, the more it seems apparent that none of these versatile people are truly masters of any one thing.  The aforementioned red mage could do a little bit of everything, but wasn’t the best at any of them.  Scottie Pippen could do just about everything, but Michael Jordan was a better scorer and Dennis Rodman was a better rebounder.  Mike Trout is the prototypical five-tool player, but Miguel Cabrera’s ability to simply hit better has won him two straight MVPs over him.  Companies and employers all across America have people on their payrolls that everyone loves to call “go-to” people who can chip in and fill in wherever they’re needed, but it’s the people with defined roles and specific titles that are in the higher pay grade.

Versatility is undoubtedly cool, but when the day is over, it doesn’t really pay off as well as being really, really good at one particular thing.

I feel like I’m a red mage.  I like a lot of things, and I try my hand at a pretty wide variety of things, but frankly, I don’t particularly think I excel at any one of them, and I think it’s because of my red mage-like tendencies that sort of cap me.

Sounds kind of like that I’m making an excuse, but I think there is some truth to people who stretch their interests thinly for a wider variety.  Using myself for an example, I’m pretty strict about my gym-going habits; if thoughts of indulging my gym hobby are running through my head, it potentially influences me when I’m indulging in another hobby of mine – writing.

Sometimes I wonder that if I want to truly get better at one particular hobby, that I need to completely ditch others.  If I want to become someone who is capable of taking better photographs, perhaps I should take some classes, or at least take extra time to practice and take pictures or something, but you know, the Braves are on television, or I feel like playing League of Legends now.  If I really want to be a truly great writer, perhaps I should not let myself get distracted by the variety of things that pique my interest.  If I want to really get into awesome shape, I’d have to really curb back on my interests in really good food, even if they are sometimes abysmal for dietary health.  And so on, and so on.

I like having a lot of things that I’m interested in, but there are plenty of times in which I feel inadequate in the opinion that I don’t think I’m really, really good at any one of them.  These are times in which I should probably stop trying to make excuses to justify those emotions, but I’ll be honest, they tend to pass pretty quickly when I stop and make myself think about them.

But really, I sometimes wonder that if I cut out particular hobbies or interests, if it would afford me the time or attention to get better at others?

Who really knows?  In the end, it’s probably best to let things like that happen organically, instead of trying to force the issue and giving up another hobby or interest cold turkey, because then that might set things up for tragic failure, and an inevitable relapse back into something claimed to have been given up.

So whatever; my attention span to writing this is waning, likely because I’m not that fantastic of a writer that’s easily distracted, maybe I have ADD or something, or maybe the fact that I’ve already said everything I sought out to say with this post.

I like being somewhat of a red mage, but it’s times like lately, in which I wonder if I’m stretched too thin over an excessive variety of interests and hobbies.