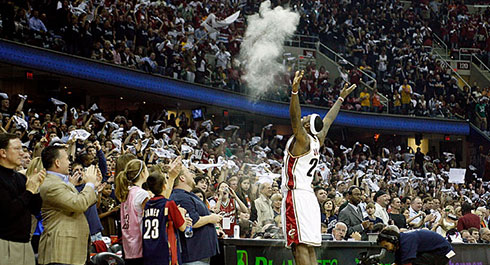 However, I think that I would prefer a world where professional sports ceased to exist, than to live in the world we live in now, where salaries are skyrocketing, greed is escalating, and egos are left unchecked and maniacally running rampant in every sport.

It gets worse every single year.  Every sport has a few players that think they’re bigger than everyone else, and unfortunately the right people always agree with them, and we read stories about how these people who are playing children’s games at an intensely higher level are making millions and millions of dollars, and have justifiably “earned” them.  Players buy into their own hype and make mockeries of the leagues of the sports that they’re good at, and the fans are doubly worse for buying into them as well, and justifying and encouraging such behavior.

There are thousands of words jumbled in my head that go along with this train of thought, but they’re wildly unsorted, and attempting to put them into coherent writing doesn’t necessarily seem like a good idea at the time.

But the point remains, every sport has these egomaniacs that are so starved for attention and money, that they make mockeries of the sports and the leagues they play for, and it makes people like me begin to feel resentment not just for them, but all involved parties that led to creation of such selfish and greedy megalomaniacs.

It just kind of makes me hate professional sports.  And unfortunately, thanks to labor unions, and the constant accusation of inflation being thrown around, salaries have no direction to go upward, and the higher the salaries get, the more insane the egos will grow, as game of keeping up with the Joneses escalates to even more ridiculous levels.

I wonder how much longer it’s going to be, before my own increasing disenchantment with professional, top-tier sports gets to a point where I simply stop caring about them at all?