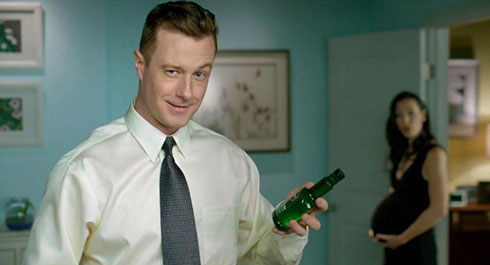 Synopsis: attractive wife in her little black dress tells husband to hurry up, before walking off. Husband’s finishing touches include application of Brüt cologne. Upon application, a shriek is heard from the adjacent bedroom, and wife re-enters the bathroom and is suddenly pregnant. Camera pans to Daschund dog, also pregnant, and then a pregnant goldfish in its fish bowl. Tagline read: LET YOUR MAN OUT.

I know the underlying message is that Brüt makes the wearer SO manly, that surrounding females of all species have no choice but to have their wombs aggressively and magically inseminated and suddenly end up in their third trimester.

But you know what’s not funny? Unwanted offspring.

Sure, Brüt might make a wearer feel like a manly man, but it’s going to really suck when your Brüt baby is born, and suddenly there’s another mouth to feed. And then if your wife snaps back like a rubberband, and it’s time to go out on a hot date again, and you forget what happened the last time you put Brüt cologne on, and knock up your wife again without the enjoyment of the corresponding sex, and repeat the process again, then it’s not really quite so funny anymore now, is it?

Let’s not forget about the puppies either. Human babies are already massive investments in their own right, but when mama Daschund has a litter of puppies, there’s a whole bunch of puppies that are going to need shots, and nowadays with the pet population as massive as it is in spite of Bob Barker’s repeated pleas to spay and neuter, it’s even difficult to give puppies away for free, too.

And who the fuck would want human/dog hybrids??

As for the fish.

In conclusion, this is actually a stupid commercial, and not just me trying to be snarky about a stupid commercial. It’s not really clever, it’s poorly imagined, and there’s really nothing funny about unplanned pregnancies and unwanted offspring.