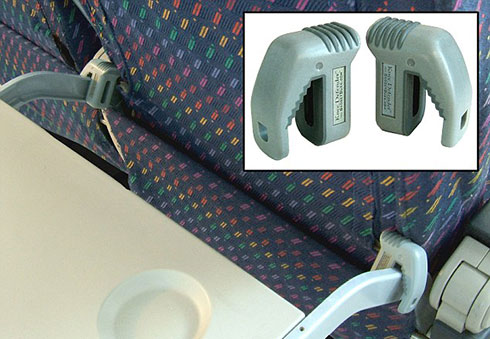 Impetus: A United flight going from Newark to Denver has to make an emergency stop in Chicago, to remove two unruly passengers from the aircraft.  The two passengers, seated one behind the other, had an altercation that stemmed from the rear passenger applying “Knee Defender” clamps, which prevent the seat ahead from being able to recline, and the front passenger taking objection to being incapable of reclining.  It culminated with front passenger throwing a cup of water in the face of rear passenger, before the flight was forced to land in Chicago to remove both from the aircraft.

Never mind the story about the altercation, the takeaway from this entire story for me is that something like Knee Defenders actually exist.  And I fucking love it.

Obviously, this is because I fly more than your average non-business traveler, and I’ve had more than my fair share of getting the one person on the entire flight who decides that they have to recline their seat.  Seriously, there will be times where I get an entire row to myself, so I decide to spread out a little bit, and the person in front of me has the exact same idea, but has to make sure that they’re in the seat in front of me.  As soon as the ding indicating that we’ve reached cruising altitude is heard, the seat plops back crudely, and if my leg is crossed, or the tray is down, it’s an unpleasant sensation of having something appear to fall into your lap.

Knee Defenders are a thing of beauty.  They’re like handcuffs for the people in front of you.  You want to recline?  Too bad, bitch.  It’s only three inches, and it can’t possibly make you any more comfortably, at least not to the magnitude it’s making me claustrophobically uncomfortable.  So I’m taking the right away from you.  And there’s nothing you can do about it but bitch about it, or tattle to a flight attendant, and hope they fare better in getting me to remove them.

Subsequently, it’s no surprised that some airlines have disallowed the use of Knee Defenders, but I think people riding on airlines that don’t prohibit them, have every right in the world to use them if they wanted to.  Obviously, given the circumstances in which I frequently fly, Knee Defenders are not something that I’d have with me on most of my flights.

However if I were ever to get on a flight with a different provider, that didn’t prohibit Knee Defenders, I’d totally have them.  And I wouldn’t be as obvious with it either; I’d give the inevitable fat recliner in front of me, perhaps an inch, but not the full reclining capabilities.  Make them think that perhaps it’s the seat, and not a third party force preventing them from getting full reclining.

I’m not really as swole as I like to think I am, but I’m apparently broad shouldered enough to almost always be rubbing elbows and shoulders with everyone if I’m in the middle seat; it would be fantastic to reduce my discomfort in at least one direction.

But god damn, does knowing that Knee Defenders exist really start creating sadistic fantasies of handcuffing inconsiderate passengers from being able to recline their seats and reduce my human claustrophobia just a little bit.