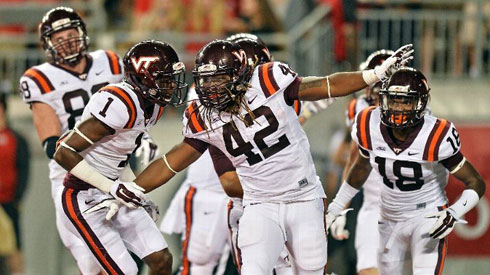 I love Virginia Tech football and all, but seriously, I didn’t even watch this game, because I thought it was such a foregone conclusion, that it wasn’t even worth watching.  #8 Ohio State versus an unranked Hokie squad slapped with the dreaded “rebuilding” tag, helmed by a coach known for his innovation with special teams?

Thanks to sports superstition, I have the belief that truly crucial games are best not being seen, because watching them will undoubtedly cause my preferred teams to lose.  That didn’t apply in this case, because I figured Ohio State was going to win something like 49-9 with the Hokies only being able to muster up three field goals, so I didn’t watch because I didn’t want to watch the seemingly inevitable slaughter.

The funny thing is that when I saw this game on the schedule, I actually did think if there was a chance that Virginia Tech could pull out the monumental upset, because Ohio State is one of those programs that I feel is pretty overrated, playing in a pretty overrated conference, and as history as indicated within the last decade and change, they’re kind of chokers.  Conversely however, is the fact that opposing them, Virginia Tech is also a football program that has been notorious for losing some pretty big games in their own history.

Razzing on my own team, I said to friends that #8 Ohio State vs. Virginia Tech had the markings of the dreaded “trap game” as they came, but the problem was that it was up to Tech to actually successfully spring the trap.  No way that was ever going to happen, right?

Bahahahaha, but it did.  I cursed myself when I went to ESPN to check the Braves score, and inadvertently saw the halftime score of Tech up 21-7 on the Buckeyes.  I immediately tried to wipe that knowledge from my mind, and that it was inevitable that Ohio State was going to come back and win, because that’s what happens to Virginia Tech in big games.  So I went back to doing what I was doing aside from watching sports (playing LoL, lol), and hoped for the best, but expected the worst.

Naturally, Virginia Tech did allow Ohio State back into the game, but something unusual happened – they buckled down, regained the lead, and held on to win, 35-21.  Color me unsuspectingly exuberant.

So in a battle between two programs notorious for choking, it seemed inevitable that the team with more to lose, had to lose.  And nothing bigger to lose than a sweet Top-10 national ranking for Ohio State.

Anyway, there’s always the possibility that Virginia Tech resumes being Virginia Tech, and loses all the rest of the games of the season (except the one to Virginia), and I’d be okay with that.  Frankly, this wasn’t a year in which I was really expecting Tech to really compete, so any successes like this monumental upset over a program like Ohio State is 100% pure gravy.