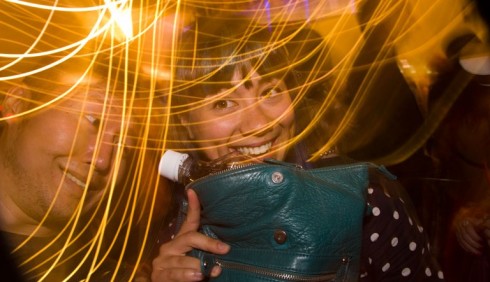 So, this picture kind of sums up my personal Dragon*Con Thursday night experience.  Once the bourbon started to flow, it literally was like an hour before I hit the deck in a well, regrettable fashion.  I know this thanks to the timestamps on the photographs of the night, several of them that I have absolutely no recollection of being taken.

I am apparently a very affectionate drunk with an affinity for attempting Blue Steel.

A little bit of backstory however: about 45 minutes after I had unloaded all of my personal effects and finally settled into my hotel room, I came to the realization that my messenger bag was nowhere to be found.  Said messenger bag contained my camera, my iPad, and one of those long-forgotten devices known as a netbook in it.  Close to roughly $1,200 of electronics in it.

Long story short, the bellman I had turned over all of my belongings to had negligently let my bag fall off the bell cart.  And in an astonishing turn of events, a Good Samaritan turned it into the lost and found.  I 100% believed that all my gadgets were lost, and was on the cusp of being completely demoralized even before the first day of the convention.  Amazingly, every single thing that was in the bag was there, and as I told the loss prevention manager of the Marriott, if I weren’t so happy to just have my stuff back, I would be absolutely furious with them for allowing this to happen.

So, while I was planning on drowning out the sorrow of losing all my gear, ended up becoming celebratory drinking.

To a pretty extreme excess.

My first thought upon waking up the next morning was simply “did I really get this trashed on Thursday night??“

I’m never proud of being drunk stories, but I’ll be the first to admit that the pictures have some comedic value in them.