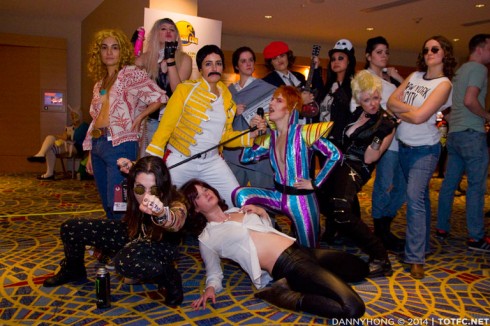 Admittedly, and embarrassingly, I admit that I spent the vast majority of Friday morning/afternoon dealing with a rager of a hangover from the previous night’s shenanigans.  That being said, I kind of felt like I didn’t take nearly as many pictures as I normally do at a D*C, but at the same time, I was wondering if there were many things that me personally, wanted to take pictures of.

I’m not saying that what was out there was utter garbage, but it’s no secret that the unofficial rule of costuming is that the big guns come out on Saturday; Fridays are like for the secondary tier of costumes, or something along those lines.  After all, I can attest to having more than one conversation with friends and acquaintances that echo such a sentiment.

Regardless, there was still plenty of things to take pictures of, and again I’ll have to remark about how I’m disappointed in myself for being so negligent and unpracticed to have gone the entire weekend with my new camera and new lens operating without the image stabilization that an amateur like me probably really needs.

I know there’s nothing I can really do about it if you choose not to (except maybe shop some genitalia on your pictures), but I would kindly ask: